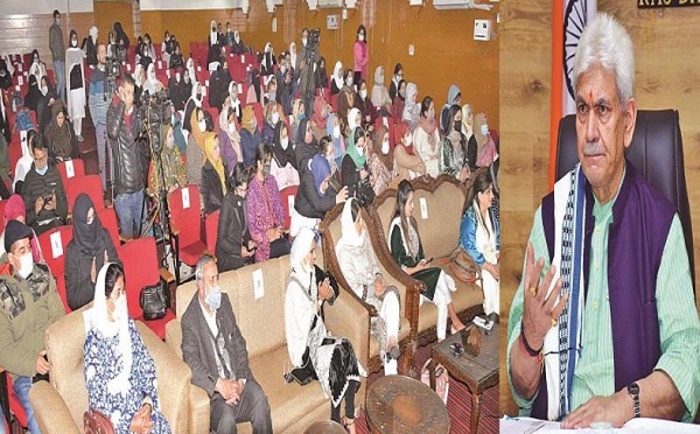 Srinagar: International Women’s Day celebrations held at Government College for Women, MA Road, Srinagar witnessed some major reforms being made by the Government for empowering the girl students and women of J&K, with Lieutenant Governor Manoj Sinha making major announcements that will facilitate the education and entrepreneurship of female folks of J&K.

Keeping in view this year’s theme of International Women’s Day i.e “Choose to Challenge” and to celebrate Azaadi Ka Amrut Mahotsav- [email protected], the Lt Governor announced the launch of Super-75 scholarship scheme to support the education of meritorious girls belonging to poor families, so that they can excel in streams like Medicine, Engineering, ITI and Humanity, and contribute to nation building.

Strengthening Women Entrepreneurs Ecosystem in J&K, the Lt Governor also announced a new scheme – Tejaswini under Mission Youth, to provide financial assistance of Rs 5 lakhs to the girls between the age group of 18 to 35 years to start their business.

Mission Youth will provide 10 % of the project cost and will also pay the interest every year, said the Lt Governor.

The Lt Governor called upon the women entrepreneurs to reap maximum benefit out of this zero interest scheme and spread the word so that other women can also avail of the benefits and take a leap towards their economic empowerment.

A new era of change and development is ushering in J&K, a change that will provide women their rightful place, a voice, an identity, and individuality. We are making tireless efforts to ensure women’s safety, modern education, and economic independence, the Lt Governor maintained.

"We have to work together to break the barriers for the economic development of women," he added.

The Lt Governor observed that J&K has a long history of women glory to bring social change and breaking new grounds as far as gender equality and professional development is concerned.

To lay a strong foundation for the girls, no fee will be charged upto 12th standard from 5,89,000 girl students who took admission in different government run schools, said the Lt Governor.

The Lt Governor observed that 88 Kasturba Gandhi Balika Vidyalaya and 88 Girls Hostels have been made functional in far flung areas and this would help in filling the gender gap and controlling the girl child dropout rate.

To assist the higher education of girls, the Government is also providing 13 different scholarship schemes, he added. Jammu & Kashmir is not just about scenic beauty.

There are so many strong historical facts that prove the capabilities of our women, their grace, compassion, courage, knowledge, spirituality and wisdom that made it a beautiful paradise, he added.

“I salute the courage and determination of every woman of Jammu & Kashmir. Today is an opportunity to come together and celebrate women’s contributions in different fields,” said the Lt Governor.

He lauded the young women achievers for making significant contributions to the welfare of society and making J&K proud.

The Lt Governor made special mention of women achievers like Rabia Altaf, Aisha Aziz, Irfana Zargar and asked the others to take inspiration from them who now have become examples of women empowerment.

Speaking on the increasing enrolment of girl students in higher education, the Lt Governor expressed satisfaction on noting that the gross enrolment ratio of girls has been increased to 50 %.

Highlighting various initiatives taken by the government for the promotion of skill development, the Lt Governor said that a few days ago, Mission Youth in collaboration with Bombay Stock Exchange imparted skill development training in banking and financial services in which more than 25 % women participated.

Mission Youth is soon going to start a digital marketing skill development programme and 50 % girls participation is expected in the said program, added the Lt Governor.

"I want the ecosystem of women entrepreneurs in J&K to be the best across the country, for that, public participation is a must. Every individual has to work collectively for safety, security and economic empowerment of women," the Lt Governor maintained.

The Lt Governor also lauded the girls for outnumbering boys in the just declared 12th class results of Kashmir Division.

In four streams, girls have bagged gold medals which itself shows the ability and talent that girls of J&K possess, he added.

Later, the Lt Governor interacted with the women achievers present on the occasion and assured full cooperation and support of the government in their future endeavours.

The awardees are Anam Siraj, a fashion designer and owner of Closet Cloud; Tamana Imran, proprietor of Dress Code; Sumaira Durrani, owner of a beauty salon and Farhana Zargar, proprietor of Ocean Holidays.

All the awardees said that the mantra to success was hard work, dedication, passion and the will to succeed.

They advised the young generation to follow their dreams with single-minded devotion and not lose focus halfway through. In total, the government felicitated 23 women achievers on this occasion.