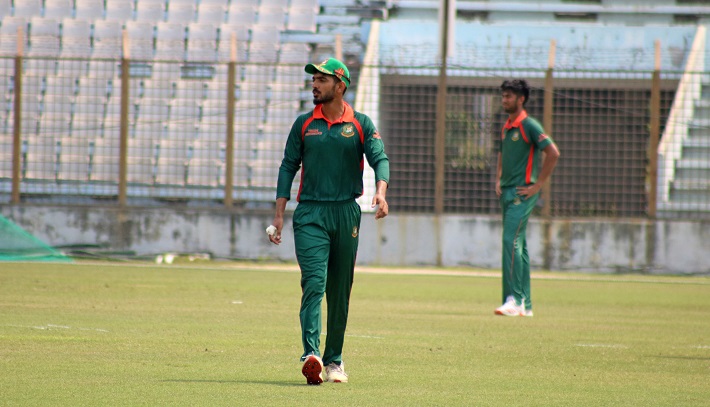 Bangladesh Emerging team skipper Saif Hassan expressed his happiness after executing balanced aggression against Ireland Wolves that enabled him to score a hundred in the third game of the ongoing five-match one-day series.

Saif led the hosts from the front by making 120 runs as they defeated Wolves by six wickets in the third match and took an unassailable 2-0 lead in Chattogram on Tuesday.

“It was quite enjoyable as I got to play freely. I’ve played a variety of shots, played some big shots as well, tried to form a partnership when the wickets were falling and when a partnership was assembled, I could afford to play some big shots, which felt really good,” Saif told The Daily Sun.

Saif struck 11 fours and five sixes for his seventh List-A hundred and he received good support from previous match hero Shamim Hossain Patwari (44 not out) and Towhid Hridoy (43 not out) during the easy run-chase.

Saif praised his team-mates for their consistent performances in the ongoing series.

“Shamim has been in an outstanding form as whenever he is entering the crease, he tends to finish the match which is very benefitting for the team as well as for the player himself.

“I'd also mention the name of Towhid Hridoy, who is also batting tremendously, and sensibly.

“I’m personally very impressed with Mukidul Islam Mugdho, bowled nicely, along with the other pacers, as the wicket was very friendly for the pacers but the left-arm spinner Rakibul Hasan was exceptionally good with the ball in the one-days.

“We are playing match by match rather than considering the whole series at once as we played the last match without any pressure and are hoping to do that once more in the next match,” he added.

The fourth-match will take place on Friday at the Sher-e-Bangla National Stadium in the capital.