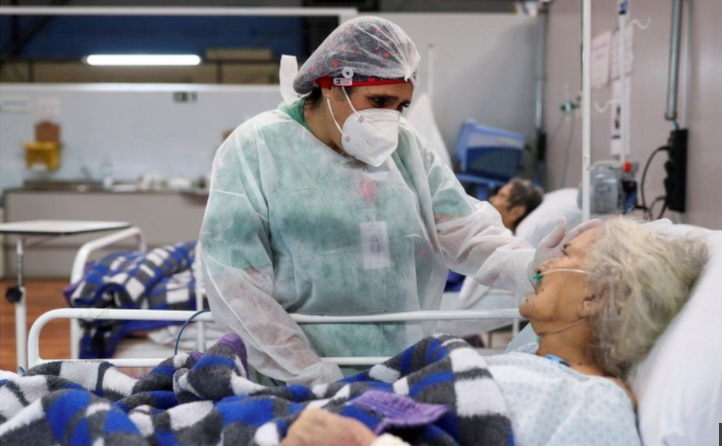 Health systems in most of Brazil's largest cities are close to collapse because of Covid-19 cases, its leading health institute warns.

More than 80% of intensive care unit beds are occupied in the capitals of 25 of Brazil's 27 states, Fiocruz said.

Experts warn that the highly contagious variant in Brazil may have knock-on effects in the region and beyond.

The country has recorded more than 266,000 deaths and 11 million cases since the pandemic began.

Despite this, President Jair Bolsonaro has consistently opposed quarantine measures and expert advice on fighting coronavirus.

What's the situation in Brazil?
On Tuesday the country recorded 1,972 Covid deaths, a new daily record.

According to Fiocruz, 15 state capitals have intensive care units (ICUs) that are at more than 90% capacity including Rio de Janeiro, Brasilia and São Paulo.

In its report, the institute warned that figures pointed to the "overload and even collapse of health systems".
"The fight against Covid-19 was lost in 2020 and there is not the slightest chance of reversing this tragic circumstance in the first half of 2021," Fiocruz's Jesem Orellana said, quoted by AFP.

"The best we can do is hope for the miracle of mass vaccination or a radical change in the management of the pandemic. Impunity in management seems to be the rule."

On Tuesday, the country also recorded more than 70,000 cases, a 38% increase on last week, according to local media. The surge in cases has been attributed to the spread of a highly contagious variant of the virus - named P1 - which is thought to have originated in the Amazon city of Manaus.

What do we know about the Brazil variant?
Preliminary data from the University of São Paulo, Imperial College London and Oxford University suggests the P1 variant could be up to twice as transmittable as the original version of the virus.

It also suggests that the new variant could evade immunity built up by having had the original version of Covid. The chance of reinfection is put at between 25% and 60%.
Last week, the Fiocruz Institute said that P1 was just one of several "variants of concern" that have become dominant in six of eight states studied by the Rio de Janeiro-based organisation.

"This information is an atomic bomb," said Roberto Kraenkel, of the Covid-19 Brazil Observatory, told the Washington Post.

"If Brazil is not serious, then it will continue to affect all the neighbourhood there and beyond."