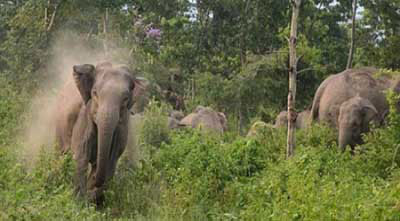 The deceased was identified as Hajera Begum, 46, wife of Nurul Alam. She was a worker of local rubber garden.

According to local sources, a group of wild elephants attacked Hajera Begum while she was going to her workplace at around 7:00am, leaving her severely injured.

Later, locals rushed her to Padua Health Complex in nearby Lohagara upazila where duty doctor declared her dead.

Following this incident, the elephants also vandalised a farmhouse and damaged some crops.

Aziznagar Union Parishad Chairman Jasim Uddin said: “The locals are panicking as the elephants still haven’t left the area. At any moment, the elephants can attack and cause loss of life and property. ”

In this regard, Lama Divisional Forest Officer SM Kaisar said that the victim’s family will be compensated by the Forest Department as per the rules.