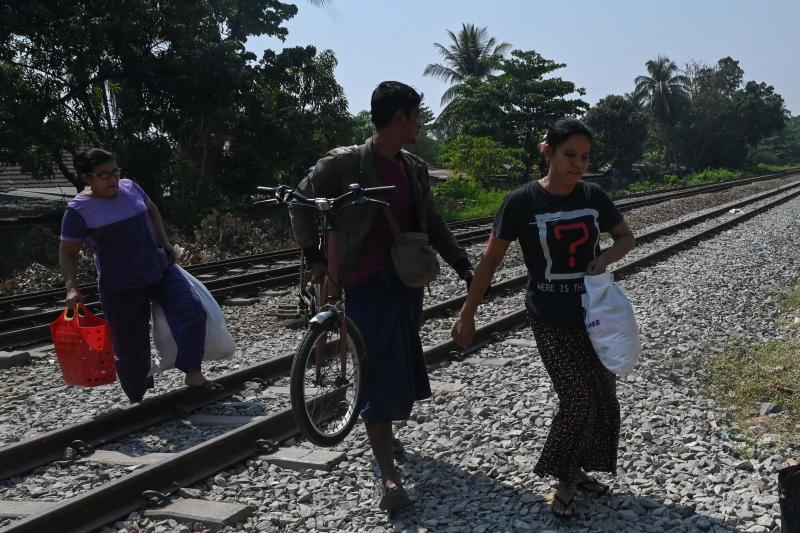 Hundreds of soldiers and police swooped on a railway station in Yangon on Wednesday seeking to arrest workers on strike to protest against the military coup in Myanmar.

The country has been in turmoil since the military ousted and detained civilian leader Aung San Suu Kyi last month, triggering daily protests around the country to demand the return of democracy.

Close to 2,000 people have been arrested and the death toll has climbed to more than 60.

Thousands of government workers across the country have been participating in a civil disobedience movement aimed at choking the state's institutions and paralysing the economy.

The movement has resulted in hospital disruptions, bank closures and empty ministry offices.

Hundreds of soldiers and police were deployed to Ma Hlwa Gone railway station and its staff housing compound early Wednesday morning where about 800 workers are participating in strike action.

"We are united," railway workers chanted as authorities blocked off a road, according to a live feed on Facebook.

"Around 300 security personnel are blocking the road searching for the people who are involved in the civil disobedience movement," a 32-year-old woman who lives at the site told AFP.

"I escaped, but there were many left, I am worried about the remaining workers. I just hope they don't arrest the people, if they do it is troubling because they could beat and kill them."

There was another heavy police presence in Yangon's central San Chaung township Wednesday morning following tensions two nights ago in which security forces sealed off a block of streets, confining around 200 anti-coup protesters before searching apartments.

State media reported Wednesday the arrest of seven protesters in that area for hanging the pictures of a monk on female longyis or sarongs Monday morning.

Protesters have been hanging women's longyis across streets to play on security forces' fears of Myanmar traditions that say women's lower parts and the garments that cover them can sap men's power.

"A total of seven rioters were investigated and (action will be taken) according to the law for their act of (insulting) the religion," the state-run Global New Light of Myanmar said.

It was another restless night in parts of Yangon Tuesday, with security forces setting fire to protesters' makeshift barricades at Thingangyun township.

One 26-year-old resident said authorities were trying to incite fear and had threatened to set peoples' homes on fire.

"But they did not succeed," she told AFP.

The coup and crackdown have triggered international condemnation and in the latest diplomatic effort, the French ambassador to Myanmar visited Yangon's Insein prison on Wednesday.

"I went... to meet the parents of hundreds of students and peaceful protesters arbitrary detained," ambassador Christian Lechervy wrote on Facebook.

"France calls for the immediate, safe and unconditional release of all political prisoners jailed since the beginning of the military coup of February 1st."

The military has sought to stem the flow of news of its crackdown, throttling the country's internet every night and stepping up pressure on independent media.

The offices of two media outlets, Mizzima and Kamaryut Media, were raided on Tuesday, after Myanmar Now was targeted the previous day.

Reporters Without Borders condemned the ongoing media crackdown and characterised the raids as "a shocking act of intimidation".

It said at least 28 journalists had been arrested since the coup and about 11 were still in custody including an Associated Press photographer.

Myanmar's ambassador to Britain was recalled on Tuesday after he urged the junta to release Suu Kyi and President Win Myint.

He "failed to perform the assigned duties," and had been called back, the Global New Light of Myanmar reported Wednesday.

The military denies responsibility for deaths since the coup and defends seizing power as justified by irregularities in November elections, won by Suu Kyi's party.