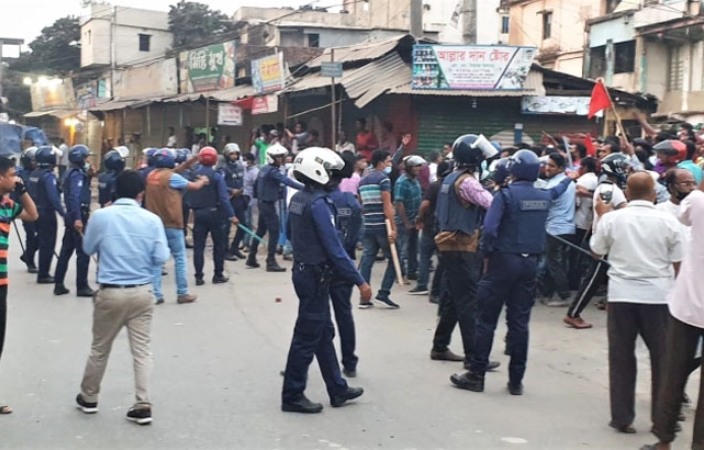 At least 27 people have been arrested in connection with Tuesday's deadly clash between two rival factions of Awami League in Noakhali, officials said Wednesday.

The clash between supporters of Quader Mirza and other Awami League activists in Noakhali's Companiganj upazila left one person dead and more than 30 others injured.

The 27 suspects have been nabbed from different parts of the upazila, officials said.

Meanwhile, the local administration has imposed prohibitory orders in the Basurhat municipality area in the wake of the clash.

Companiganj Upazila Nirbahi Officer (UNO) Mohamamd Ziaul Haque Mir said that the prohibitory orders would remain in force till 12 am on Wednesday.

“We have enforced the emergency Section 144 of the Code of Criminal Procedure, which prohibits assembly of four or more people, apprehending more clashes between the two rival factions," he said.

Shops and bazaar in the Basurhat municipality area will also remain closed, the UNO added.

The clash erupted between the two rival factions around 6 pm in Companiganj, when some Awami League supporters were agitating in protest against the harassment of freedom fighter Khĳir Hayat Khan allegedly by Quader Mirza.

Mirza’s nephew Fakhrul Islam Rahat, a Khan loyalist, alleged that supporters of his uncle hurled improvised bombs on the protesters and also fired shots to disperse them.

Alauddin, 20, an activist of local unit Jubo League and son of Mominul Haque of Charfakira union, was shot dead, while the 30 others sustained injuries.

Of the injured, eight people suffered bullet wounds. Seven of them are still undergoing treatment at Noakhali General Hospital, while one has been referred to a hospital in Dhaka after his condition worsened.

Alauddin's has been sent to Noakhali General Hospital morgue for an autopsy.