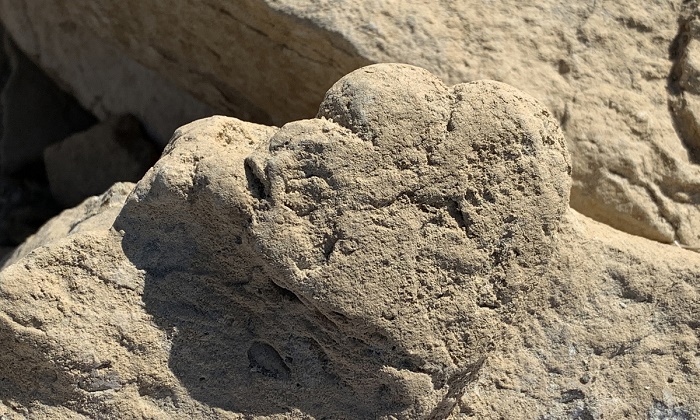 An international team of dinosaur experts on Tuesday announced that it has identified a fossilized stegosaur track less than 6 cm in length -- the smallest of its kind ever found.

The dinosaur track was discovered in June 2019 at a site in Karamay, northwest China's Xinjiang Uygur Autonomous Region. Since 2009, scientists have discovered and confirmed the authenticity of a large number of tracks left by dinosaurs, birds, pterosaurs and turtles at the site, speculating that it was an area with abundant aquatic plants and many prehistoric animals about 120 million years ago.

Stegosaurs were plant-eating dinosaurs that lived approximately 155 million years ago during the Jurassic Period. They walked on four short legs and had small heads, with plates on their backs and defensive spikes on their tails. The name stegosaur can be translated to "roof lizard." Stegosaurs have featured in many Hollywood movies.

Stegosaur fossils have been found mostly in the Northern Hemisphere, particularly in the United States and China.

The newly confirmed delta-shaped track with three short, thick digits, is 5.7 cm long -- equivalent to 15 percent of the length of other dinosaur tracks previously found in the region.

Scientists believe it is the world's smallest convincing stegosaur track currently on record, and that it could have been made by a young, 1-meter-long dinosaur.

The finding was published in the international journal Palaios earlier this month.

Xing Lida, the article's first author and a researcher at the China University of Geosciences (Beijing), said that dinosaur tracks measuring less than 11 cm in length are rare, and that scientists had previously reported a small, delta-shaped track measuring 8 cm in length.

"But this dinosaur track found in Xinjiang is not the world's smallest," said Xing, noting that smaller tracks made by other types of dinosaurs have been reported.

In 2011, scientists discovered a dinosaur track in the Republic of Korea that was just 1 cm in length. They estimated the trackmaker would have been small enough to "fit in the palm of your hand."