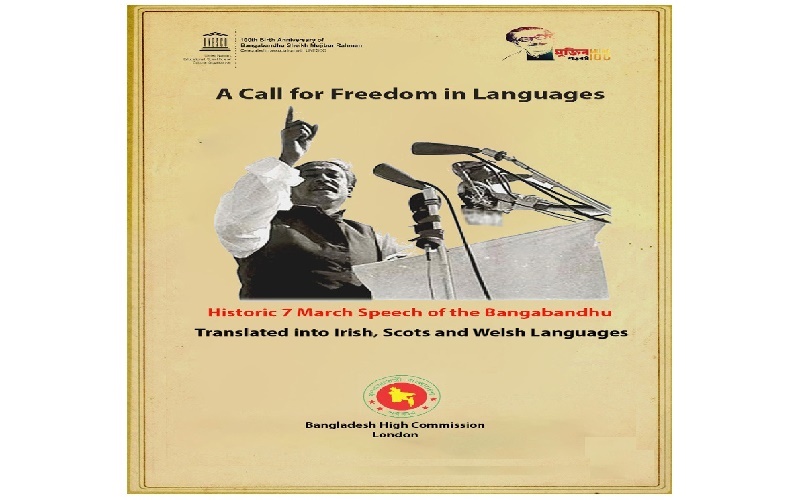 Bangladesh High Commission in London has unveiled the first-ever translations of Bangabandhu’s March 7 speech in Irish, Scottish and Welsh languages in a special publication titled “A call for freedom in languages”.

At a special initiative of Bangladesh High Commissioner to the UK and Ireland Saida Muna Tasneem, language experts of Trinity College, Dublin, Herriot-Watt University, Scotland and University of Wales Trinity Saint David accomplished the translations in their respective languages. 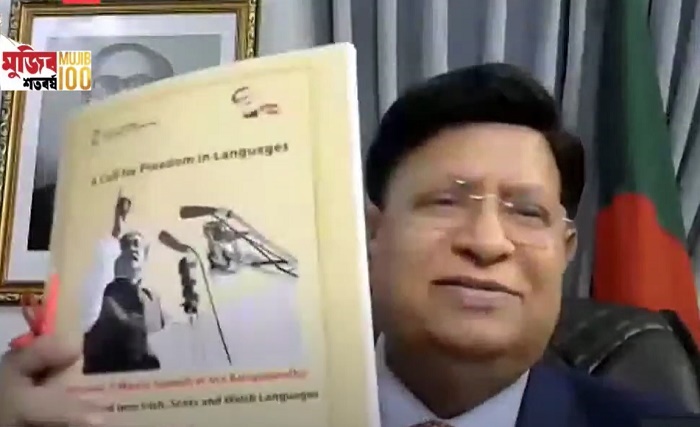 Unveiling the translations, Foreign Minister Dr A.K. Abdul Momen said, “This special publication would certainly bring the history of Bangladesh’s independence and the charismatic oratory of the Bangabandhu closer to the Irish, Scottish and Welsh people and deepen our cultural heritage, linguistic linkages and human connectivity.”

While recalling his presence at Dhaka Racecourse, the Foreign Minister commented that the March 7 speech by Bangabandhu does not only tell the story of struggles for freedom of the oppressed Bengali nation but as a UNESCO Documentary Heritage of Mankind, it remains an everlasting inspiration for all oppressed and freedom-loving people around the world, wherever their homeland is, whatever language they speak.

State Minister for Cultural Affairs of Bangladesh K M Khalid said that the translation of Bangabandhu’s historic March 7 speech in three European and British languages is a commendable initiative by the Bangladesh High Commission of London which will encourage further research and studies on Bangabandhu and Bangladesh at the European and UK universities.

High Commissioner Saida Muna Tasneem in her opening remarks said, “We take great pride that the historic 7 March Speech of Bangabandhu Sheikh Mujibur Rahman is the first Bengali language document translated into Scottish, Irish and Welsh, which will take Bangabandhu’s epic speech closer to the people of Scotland, Ireland and Welsh.”

Noting that the translation of the historic March 7 speech into three more European languages will make the total foreign language translations to 17. 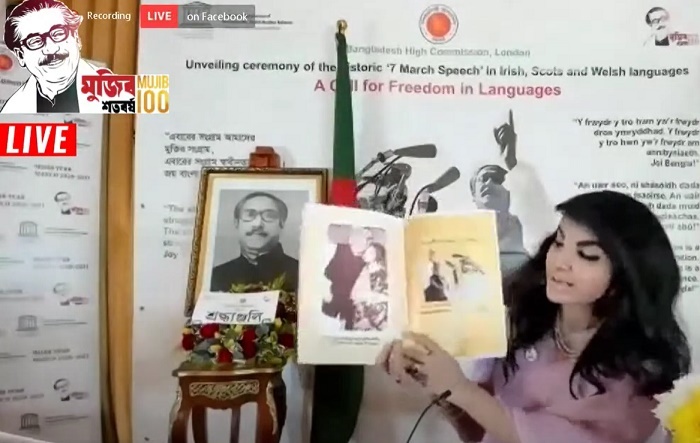 The High Commissioner reaffirmed that the London High Commission would be working closely with the University of Edinburgh, Trinity St David’s and the Trinity College of Dublin for commissioning further research on the political significance of this UNESCO World Documentary heritage speech.

Minister for Europe and Prime Minister’s Office of the Irish Foreign Ministry Thomas Byrne said, “With its translation in Irish language, people of Ireland will now understand the importance of the speech of Bangladesh’s Founding Father the Bangabandhu and the precious words of this historic speech would bring the Irish people closer to the spirit of Bangladesh as mentioned by Bangabandhu”.

First Minister of Wales Rt Hon Mark Drakeford MS said, “The translation of historic March 7 speech of the Bangabandhu in Welsh will help people of Wales learn more about the history of Bangladesh’s independence while it will continue to motivate all freedom-loving people across the globe.