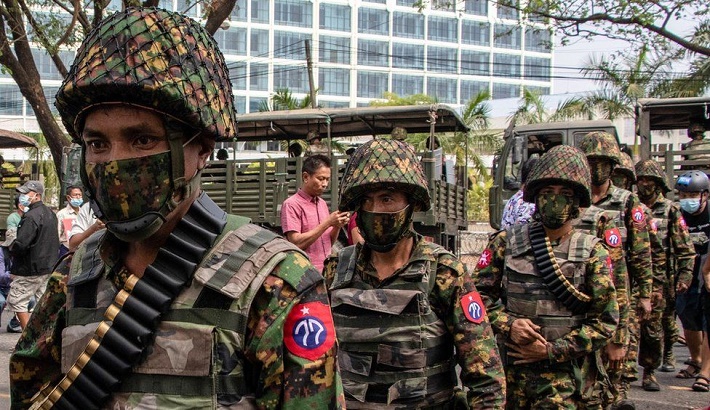 Myanmar's military - the leaders of its recent coup - are funded by a huge chunk of the national budget. But the armed forces also draw a vast and secretive income from sprawling business interests:

At Yangon's popular Indoor Skydiving Centre, visitors can experience the thrill of jumping out of a plane from the safety of a vertical wind tunnel.

But few people spiralling through this high-flying attraction may realise that it is part of a huge, military-run business empire - one completely woven into the fabric of national life.

Critics argue that this lucrative network has made Myanmar's coup possible and put the military's accountability into free fall.

Civilian businesses talk of an environment like "Sicily under the Mafia", while activists say that democratic reforms can only be possible only when "the military [is] back to barracks".

Myanmar's military - the Tatmadaw - began its involvement in business after the socialist coup of Ne Win in 1962.

For years, military battalions were required to be self-sufficient and encouraged to develop stakes in local enterprises to fund their operations.

While this practice has been phased out, two military-run conglomerates were established in the 1990s as the government began privatising state industries.

Both organisations - Myanmar Economic Corporation (MEC) and Myanmar Economic Holdings Limited (MEHL) - have since become a key source of wealth for the Tatmadaw, with stakes in everything from banking and mining to tobacco and tourism. MEHL also operates the military's pension fund.

Several military leaders and their families hold extensive business interests as well, and have been subject to sanctions in the past.

The full extent of these business interests is hard to quantify. But experts say that the military's business clout remains significant, despite recent democratic reforms, and the coup could partly be an attempt to protect these financial interests.

The little we do know about the military's financial reach has only come to light in recent years.

A UN report in 2019, spurred by Myanmar's crackdown on Rohingya communities, concluded that business revenues enhanced the military's ability to carry out human rights abuses with impunity.

Through a network of conglomerate-owned businesses and affiliates, the UN said the Tatmadaw had been able to "insulate itself from accountability and oversight".

Details about MEHL's structure and finances were also revealed in two internal reports - one filed by the conglomerate in January 2020, the other leaked by activist groups Justice for Burma and Amnesty International.

They showed that the conglomerate is run by the military's top brass, including several leaders of the ongoing coup. Around a third of all shareholders are military units, while the rest are owned by former and current Tatmadaw personnel.

The leaked report said that, between 1990 and 2011, MEHL paid its shareholders 108bn kyats in dividends - worth $16.6bn, according to official exchange rates at the time.

It also suggested that the military uses MEHL shares to reward loyalty and punish bad behaviour. One table lists 35 people who were stripped of their dividends for reasons like desertion and imprisonment.

The MEHL has not commented publicly on the leaked report.

In the wake of the coup, advocacy groups have issued further calls for targeted sanctions against the military and its access to the global financial system.

Many activists want to see the conglomerates dismantled as well.

In a statement to the BBC, Justice for Myanmar accused the military of being in "an unlawful conflict of interest".

"The wealth stolen by the military and their businesses belongs to the people of Myanmar and must be returned to them," they added.