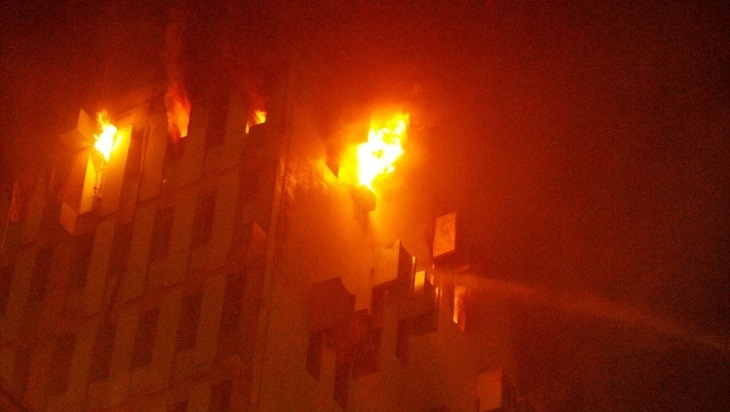 The death toll in Monday's deadly highrise fire in the eastern state of West Bengal's capital Kolkata has risen to nine, officials said on Tuesday.

"The fire broke out around 6.30 pm (IST) Monday. By 11pm, seven charred bodies were recovered from the highrise building. Two more bodies were found in the early hours of Tuesday, taking the toll to nine," a fire official said.

The blaze started on the 13th floor of the New Koila Ghat Building, an office building on the banks of the Hooghly river, in the evening and soon engulfed the entire floor, which houses the ticketing office of the Indian Railways.

"Saddened by the loss of lives due to the fire tragedy in Kolkata. In this hour of sadness, my thoughts are with the bereaved families. May the injured recover at the earliest," the Prime Minister tweeted.

State Chief Minister Mamata Banerjee who rushed to the spot around 11 pm (IST) Monday told the media that four firefighters and two cops were among those killed in the blaze.

According to State Fire Services Minister Sujit Bose, as many as 25 fire tenders were pressed into service within minutes of the control room getting the first call. It took the firemen four hours to douse the flames.

"The firefighters who died were among the first to take the elevator to the 13th floor. It's strange that the firemen took the lift to the 13th floor instead of taking the staircase or using hydraulic cranes," the CM said.

The state government has announced a compensation of Rs 10 lakh each to the families of the seven victims.

"A probe has been ordered into the fire accident. We will also investigate why the firemen didn't follow the basic protocol and took the lift," the Fire Services Minister said.