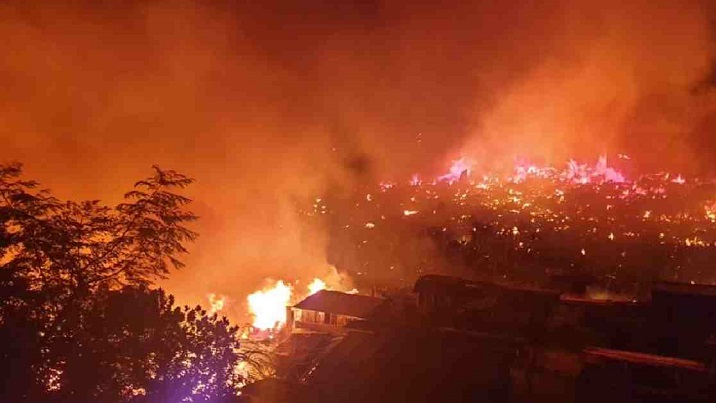 There have been close to 500 cases of fire in Thakurgaon district in the past one year, a government survey has revealed.

According to the survey by the District Fire Service and Civil Defence, goods and valuables worth Tk 2.37 crore were gutted in as many 483 cases of fire between February 2020 and February 2021.

Of the 483 cases of fire, 167 were reported in Sadar upazila, 141 in Baliadangi upazila, 105 in Pirganj upazila, 55 in Ranisankail upazila and 15 in Haripur upazila of the district.

The figures include fires due to electrical short-circuits, fires from cooking gas cylinder leaks and those accidentally started by children.
According to investigations carried out by the government department, 53 fires were due to electrical short-circuits, 41 originated from gas ovens due to leaks in supply pipes and nine started by children while playing with fire.

Besides, narrow lanes affect response time, he added. "Shortage of ponds or water filling points in the vicinity also creates huddles for the firefighters. Also, we have only two water tanks in Thakurgaon fire office with capacities of 1,800 litres and 4,300 litres, respectively."

Adding to the woes is the fact that the department doesn't have adequate manpower, said Mafidar. "We also need to generate public awareness for reducing fire accidents."

Fires are common in Bangladesh and claim a number of lives every year.

In 2018, the country witnessed 8,461 cases of fire in residential buildings, the majority in Dhaka Division, according to a report by Dataful, an online database.

Experts have urged the government to focus on urban planning and form a committee on fire safety. They have also recommended immediate halt to construction of "risky buildings".