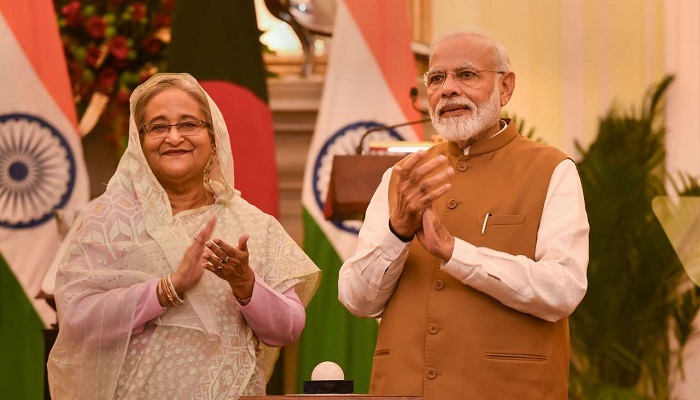 Prime Minister Sheikh Hasina and her Indian counterpart Narendra Modi will inaugurate the 'Maitri Setu over Feni river on Tuesday.

If inaugurated, the bridge will establish highway network between two countries at Tripura point.

With this bridge, Tripura is set to become gateway of northeast with access to Chattogram Port of Bangladesh, which is just 80 km from Sabroom.

According to Indian Prime Minister's Office (PMO), the setu will be inaugurated through video conference.

Because of her pre engagement, PM Hasina will not be present at the time of inauguration but her recorded speech will be broadcast, said reliable sources at Bangladesh High Commission in New Delhi.

Hasina and Modi were supposed to inaugurate 'Maitri setu' during the latter’s upcoming Dhaka visit. At the request of PM Modi, the inauguration is taking place earlier.

Sources indicated that March 9 is the completion of BJP term of Tripura. PM Modi wants to 'gift' the state with this landmark connectivity.

Coincidentally, March 9 is the last day of filing nomination papers of the first phase poll of West Bengal and Assam assembly.

Using the diplomatic platform, BJP party wants to give a message to the voters of those states before the poll.

Other than maitri setu, PM will inaugurate a series of infrastructural projects in the state of Tripura. The other projects are integrated command and control centers which enable city Agartala to identify potential and challenges using digital technology to integrate different service networks. Ultimately, it enable real time collaboration among departments such as police, power, water, sanitation and other public services.

He will also lay foundation stone of integrated check-post of Sabroom which will be important for connecting Tripura and Bangladesh.

Prime Minister Modi will inaugurate the ‘Maitri Setu’ at 12pm via video conferencing, the PMO said in a statement.

The construction was taken up by the National Highways and Infrastructure Development Corporation Ltd at the cost of Rs 133 crore. The 1.9 km long bridge joins Sabroom in India with Ramgarh in Bangladesh.

It is poised to herald a new chapter for trade and people-to-people movement between India and Bangladesh, the PMO said.

It will help ease the movement of goods and passengers between the two countries, provide new market opportunities for products of northeast states and assist seamless movement of passengers to and from India and Bangladesh.

The project is being taken up by the Land Ports Authority of India at an estimated cost of about Rs 232 crore, the statement said.

It will be an alternative route to the NH-44. The 80 km NH-208 project has been initiated by the National Highways and Infrastructure Development Corporation Ltd at a cost of Rs 1,078 crores.

Prime Minister Modi will also inaugurate state highways and other district roads, developed by the state government with a financial outlay of Rs 63.75 crore, the statement said.

They will provide all-weather connectivity to the people of Tripura, it said.