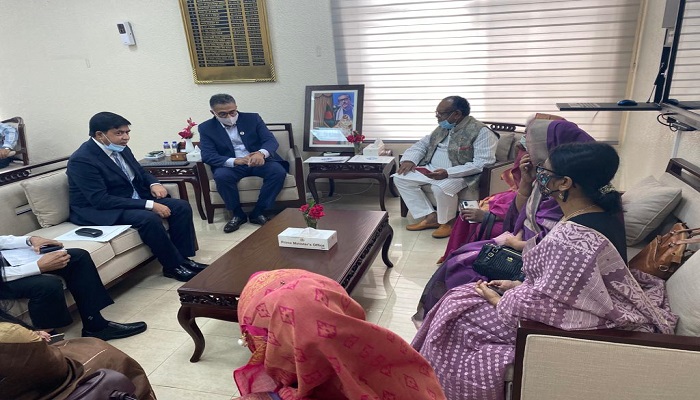 Some 153 Members of Parliament have urged Prime Minister Sheikh Hasina to ban the harmful e-cigarette.

The lawmakers under the banner of ‘Bangladesh Parliamentary Forum for Health and Wellbeing’ made the request to the premier through a letter to her.

The letter, signed by 153 MPs, demanded banning import, production, sale, marketing and use of E-Cigarette in Bangladesh.

Receiving the letter, Dr. Ahmad Kaikaus said the initiative of the MPs against the harmful tobacco is certainly praiseworthy as they have taken the matter seriously.

However, he also assured the lawmakers of taking necessary legal action in this regard.

Handing over the letter, Habibe Millat MP said, “Every tobacco product, including e-cigarettes, is harmful to health. Especially young people are being led to the destruction of tobacco including e-cigarettes. Therefore, it is necessary to amend the tobacco control law and increase its tax.”

All the MPs including former health minister AFM Ruhul Haque, also expressed their views emphasizing the necessity of amendment of the tobacco control law and increasing the tobacco taxes.

At the same time, they also demanded that e-cigarettes should be banned immediately in a bid to protect public health from its harmful effects.

The lawmakers also mentioned that that the Prime Minister has declared that Bangladesh would be tobacco free within 2040.

To achieve this target, it’s important to amend tobacco control law and imposing increased amount of taxation on tobacco products. However, the challenge of making the country free from tobacco has been increased due to E-Cigarette in the country as well, they said.

According to the Bangladesh Parliamentary Forum for Health & Wellbeing, the E-Cigarette increases the risk of stroke 71 per cent. On the other hand, risk of heart attack and cardiac disease 59 per cent and 71 percent respectively.

The e-cigarettes’ main ingredient e-juice contains dangerous flavoruing agents which caused and increases the risk of chronic diseases of the respiratory, liver, kidneys.

Mentioning that e-cigarettes and vaping have already been banned in 42 countries, the Bangladesh Parliamentary Forum for Health & Wellbeing said there have been demands to ban e-cigarettes multiple times in Bangladesh.

The main consumers of e-cigarettes in Bangladesh are teenagers and young people while the harmful product is getting popularity among aged people also.

Moreover, the situation is becoming more risky as there is no regulation on the import of these products. In this case, it is important to ban the use of this harmful product before it is widely used.

Bangladesh Parliamentary Forum for Health & Wellbeing sources said a letter signed by 152 lawmakers have planned to be handed over to the health and family welfare minister Zahid Maleque soon demanding to amend the tobacco control law.