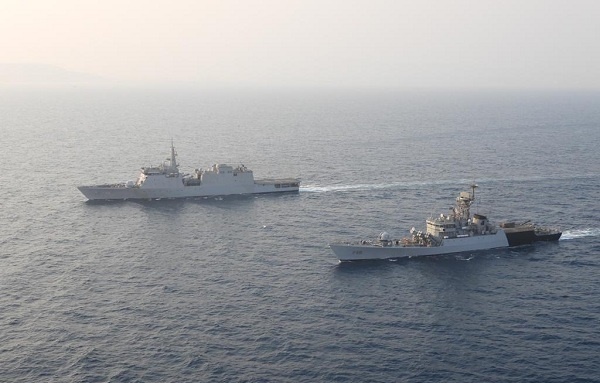 To celebrate historic occasions of ‘Mujibo Barsho’ and ‘50 Years of Liberation War’, two Indian Naval Ships, INS Kulish and INS Sumedha will visit port of Mongla from March 8 to 10.

The visit is especially significant as this is the first visit by Indian Naval Ships to Mongla, said the High Commission of India on Monday.

The last time it happened was 50 years ago when on December 9/10 in 1971, the two gunboats Padma and Palash, jointly manned by Indian Navy and Mukti Bahini personnel, in a covert operation sailed up the Pusur river attacking various Pakistani installations at the Port.

The ship is commanded by Cdr Gaurav Durgaprasad and is designed for patrolling and surveillance of India’s vast EEZ.

Along with main gun and anti aircraft guns, the ship also carries an integral ALH/Alouette helicopter.

The second ship, INS Kulish is also indigenously built for anti-surface warfare operations. The ship is commanded by Cdr Sanjeev Agnihotri and is armed with surface to surface missiles, main gun, anti aircraft guns and missiles. It is also capable of operating helicopters.

During the visit, the Senior Officers from the Indian side will be paying homage to Bangabandhu by laying wreaths at his mausoleum at Tungipara.

They will also lay wreaths at the grave of Bir Shrestho Ruhul Amin who sacrificed his life while fighting onboard the gunboat Palash at Mongla on 10 Dec 1971.

The Indian ships will also honour Bangladesh Navy Veterans of Liberation War, during onboard reception and gift Bangladesh Navy items of historical value for displaying at the Armed forces Museum.

There will also be professional discussions with Bangladesh Navy and courtesy calls on Senior Officers at Mongla and Khulna. Both navies will also have friendly sports fixtures and visits to each other’s ships.

While departing on 10 Mar, both navies will conduct a joint passage exercise.

The visit will boost the strong and flourishing ties between Indian and Bangladesh Navies.