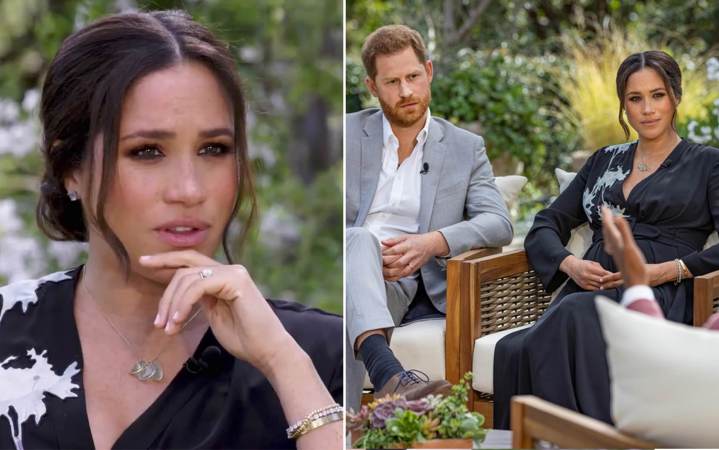 Prince Harry's wife Meghan Markle on Sunday said she contemplated taking her own life after joining the royal family, and raised allegations of racism in the monarchy during an explosive television interview.

Explaining the couple's dramatic exit from royal life, Meghan said she was denied help during her mental health crisis, was targeted by lies, and that there was official concern about the skin color of her unborn son.

Meghan, whose father is white and mother is Black, spoke out in an interview with Oprah Winfrey that immediately became one of the most extraordinary chapters in recent royal history and was set to rock the British institution.

"I... just didn't want to be alive anymore. And that was a very clear and real and frightening constant thought," she told Winfrey, describing the impact of a torrent of vitriol from hostile tabloids and social media.

Asked if she had had suicidal thoughts while pregnant, Meghan replied "Yes. This was very, very clear."

Recalling how she felt at the time, she said that "I'm scared, because this is very real."

Meghan, 39, also told of royal "concerns" about "how dark" her son's skin would be, saying Harry revealed to her official conversations over Archie's appearance, as well as the security he would be entitled to, ahead of his birth on May 6, 2019.

"In those months when I was pregnant... we have in tandem the conversation of 'he won't be given security, he's not going to be given a title' and also concerns and conversations about how dark his skin might be when he's born," Meghan said.

"That was relayed to me from Harry, those were conversations the family had with him," she said.

After the couple's surprise decision to move to North America, the former television actress has been portrayed in some British newspapers as headstrong, calculating and spoiled, and the couple reckless and selfish for quitting royal life.

The two-hour interview with the queen of US television was the biggest royal tell-all since Harry's mother princess Diana detailed her crumbling marriage to his father Prince Charles in 1995.

Harry, 36, revealed the deep divisions within his family, saying he felt "really let down" by how his father had handled the situation.

But he also said Charles -- the heir to the throne -- and Harry's older brother William were "trapped" by the conventions of the monarchy.

"They don't get to leave. And I have huge compassion for that," he said.

Winfrey reportedly sold the interview to US broadcaster CBS for $7-9 million, and retained the international rights to the footage, which will feed an appetite of interest about Britain's centuries-old monarchy -- and their troubles -- across the globe.

Royal fans were offered a treat when the couple revealed the gender of their second child -- the first senior royal due to be born outside Britain in 100 years.

"It's a girl!" Harry and Meghan chimed in tandem.

But it was a rare light-hearted moment in the drawn-out interview -- and viewers who tuned in to see if the pair had scores to settle with Buckingham Palace were likely left shocked at how far they went.

Taking aim squarely at senior royals, Markle flatly denied reports -- feasted on by the gossip press -- that she made Kate Middleton cry before her wedding to Harry, saying the reality was the opposite.

"Everyone in the institution knew it wasn't true," Meghan told Winfrey.

"The reverse happened," Meghan added, saying that Kate "was upset about something, but she owned it, and she apologized."

"A few days before the wedding, she was upset about something pertaining -- yes, the issue was correct -- about flower girl dresses, and it made me cry, and it really hurt my feelings."

Meghan called the claims "the beginning of a real character assassination" and "a turning point" in her relations with the royal family.

"I came to understand that not only was I not being protected but that they were willing to lie to protect other members of the family," she said.

Ahead of Sunday's broadcast, revelations emerged Meghan was facing an internal palace investigation into claims that she bullied royal household staff after she and Harry married in a fairytale wedding in 2018.

Further reports the couple are facing a probe into their charitable foundation have been seen as a counter-offensive in a bitter battle for public support.

Last month, when Buckingham Palace confirmed the couple would not return to their senior roles, it said they would not "continue with the responsibilities and duties that come with a life of public service."

"I'm sad that what's happened has happened, but I know... we did everything that we could to make it work," Harry said as the interview wrapped up.

The Sunday Times said Queen Elizabeth II, 94, would not be watching the couple.

The weekly quoted unnamed courtiers as calling the situation a "circus," and the palace would "come out swinging" if individuals were attacked.