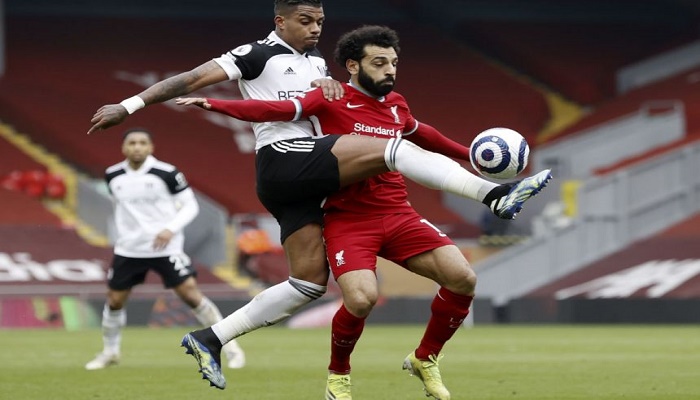 Jurgen Klopp admitted Liverpool's stunning collapse is one of the worst spells of his managerial career after Mario Lemina condemned the troubled champions to a shock 1-0 defeat against lowly Fulham on Sunday.

Klopp's side are four points adrift of fourth-placed Chelsea, who can extend that lead to seven if they beat Everton on Monday.

That would leave Liverpool with a tough task to qualify for next season's Champions League via a top four finish.

They could still make it by winning the Champions League, but glory in Europe's elite club competition is hard to envisage given Liverpool's steep decline.

In a sign of how far they have fallen, even third-bottom Fulham easily out-played Liverpool to secure three points at Anfield for the first time in nine years.

Without a home victory since before Christmas, Liverpool are a pale shadow of the team that romped to their first English title for 30 years last season.

They have been destabilised by horrific injury problems in defence, but it was still jarring to see the toothless Reds surrender so tamely once again.

Asked if it was among his worst periods, Klopp said: "I would wish to say no but yes it is. That's not a problem. I don't always have to have the best times.

"This team is an extreme team. We were extremely successful and now we have an extreme situation as well but we will fight through."

Worryingly for Liverpool fans, Klopp conceded he does not have the answers to arrest the slide.

"We never had a momentum in the season. You can see it's still in the boys. They still have it all but at the moment can't show it. It would be a masterpiece to find out how we change that overnight," he said.

"My boys wanted it. It's easy to say Fulham have won it so wanted it more. I don't think that's the problem.

"I don't have to stand here and say we're fighting for this or that."

Klopp insists his stars will remain loyal even if Liverpool miss out on a Champions League place.

But on the evidence of their latest embarrassment, the Reds boss might need to make significant changes to catch champions-elect Manchester City next term.

With one eye on defending their 2-0 lead in Wednesday's Champions League last 16 second leg against Leipzig, Klopp made seven changes and fielded a youthful defence featuring Neco Williams, Rhys Williams and Nat Phillips.

Unsurprisingly, Liverpool showed a lack of organisation and cohesion at the back, with Josh Maja sneaking behind the two inexperienced central defenders to scoop his volley over the bar.

Fulham were causing Liverpool's makeshift defence all manner of problems and Maja was narrowly off-target from Ademola Lookman's pass.

Diogo Jota made his first start since December after injury and Xherdan Shaqiri was up front as they replaced Sadio Mane and the injured Roberto Firmino.

Shaqiri curled a free-kick just over, but Liverpool were impotent in attack and Fulham's impressive display was rewarded in first half stoppage-time.

When Andrew Robertson could only head clear to the edge of the area, Mohamed Salah was easily brushed off the ball by Lemina, who drilled a fine finish into the far corner of Alisson Becker's goal.

It was a sweet moment for the Gabon international after his accidental handball saw Maja's equaliser against Tottenham harshly ruled out in midweek.

Salah's half-hearted effort was hardly the response Klopp was looking for after the Egyptian showed his frustration when he was substituted against Chelsea on Thursday.

Jota's stinging volley from Neco Williams' cross forced a fine Alphonse Areola save early in the second half.

Just after that chance, a plane flew over Anfield bearing the slogan "Unity is strength. Let's go Reds. YNWA".

Although Mane came off the bench to loop a header onto the woodwork and Shaqiri went close with a curler, Liverpool rarely looked like responding to that call to arms.