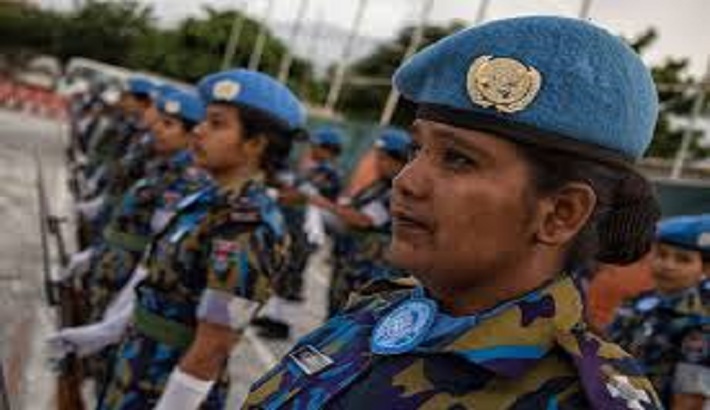 The participation of women in the armed forces and police force of the country is increasing day by day and their contribution is also being recognised and acknowledged.

According to the Police Headquarters, women police are now doing various tasks and carrying light to heavy weapons. They are also working on traffic control. They are moving forward equally with the male personnel.

Md Sohel Rana, Assistant Inspector General (media) of Police Headquarters, said “The total strength of the police force is 191,295 till January 2021. The police currently have 15,163 women members, which is 7.92 per cent of the total police force. The ratio is gradually increasing every year.”

A special illustrated report on women members of the Bangladesh Police in peacekeeping missions was published in the Time Magazine.

have a very glorious achievement in peacekeeping missions.”

He called upon them to bring more fame and glory to the country by participating in peacekeeping missions in the future.

The current government is also sending women to UN missions on a priority basis to accelerate the advancement of women in the police and armed forces.

They have been able to keep their talents in line with men in maintaining peace under the leadership of the United Nations (UN). The advancement of women police and armed forces are now visible.

Although women police members have to face various obstacles in arresting criminals, they are still moving forward. Women police are also being praised for proving their skills.

According to police headquarters sources, women members are now working in all police units. There are also women leading some units. Women members are running Victim Support Centers and DMP’s Women Support and Investigation Division across the country.

As a call taker in the National Emergency Service 999, female police members came up in the discussion by demonstrating their talent.

Even in traffic control on the road, women police personnel have been able to attract everyone’s attention. They are also investigating the cases of abuse of women and children.

Women members of the police are working at home and abroad with proof of talent, ability and skills. The women members of the UN peacekeeping mission have set a unique example by performing their duties with honesty and dedication.

Women members of the Bangladesh Police are now regulars in UN peacekeeping missions. They are enriching the economy of Bangladesh by earning crores of taka every year.

There was no female member in Bangladesh’s police force after the independent. As per the guidance of Bangabandhu Sheikh Mujibur Rahman, 14 women were initially appointed to the police force in 1974. Since then, women have started joining the police force.

The recruitment of women police officers to the BCS cadre started in 1984, almost 10 years after they started participating in the police force.

The important contribution of women members of Bangladesh Police in the UN peacekeeping mission has also been mentioned in the widely circulated and popular media of the world.

Bangladesh Armed forces have played a significant role in women empowerment and gender mainstreaming by employing women as peacekeepers in volatile security situations of the field missions.

In September last year, Bangladesh has secured the top position among the countries in sending troops to the United Nations peacekeeping missions, according to the Inter Services Public Relations Directorate.

Female members of the Bangladeshi military contingent serving with the United Nations Mission in South Sudan are inspiring women in the communities they serve to consider a career in the country’s security forces, according to an article published in the UN peacekeeping website.