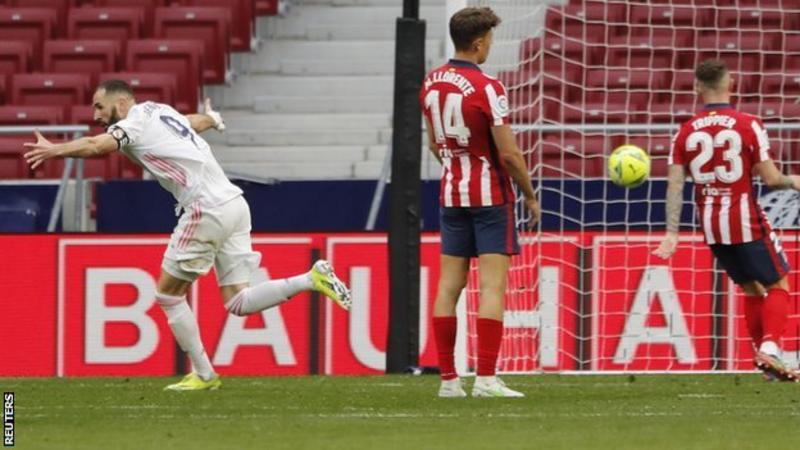 Atletico Madrid squandered the chance to inflict a heavy blow on Real Madrid's La Liga title hopes on Sunday as Karim Benzema's late equaliser earned the champions a 1-1 draw and kept them in the race at the top.

Luis Suarez's flicked finish early in the first half looked to be enough to give Atletico a crucial win that would have put them eight points clear of their opponents, with a game in hand.

But they failed to make their authority count and Benzema punished them in the 88th minute, his goal earning Real Madrid a draw that ensures the gap between the two city rivals stays at five points.

"They took the first half and we took the second, the draw was more or less a fair result," said Zinedine Zidane. "There remains a lot of the season left and we'll fight to the end."

Atletico's lead is still considerable and they can extend it to eight points with 12 matches left if they win their game in hand at home to Athletic Bilbao on Wednesday night.

Yet at full-time, it was Real Madrid's players who had smiles on their faces, while Suarez left the pitch shaking his head, with Atletico only too aware this was a huge opportunity missed.

"It depends which way you look at it," said Diego Simeone. "In the negative, they equalised in the last minute, or the positive, that we played very well in general, that we absolutely controlled the first half, and dominated the second."

The title race remains very much in Atletico's favour but still up for grabs, especially for Barcelona, who were perhaps the biggest beneficiaries of this result.

Barca, whose members were voting in the club's new president on Sunday, now sit three points behind Atletico, having played a game more. They also face Simeone's side at Camp Nou in May.

"It's a long and difficult competition," added Simeone. "I don't know what people expected, that we were going to win it by 20 points? We know it is going to be difficult."

Kieran Trippier played his first game since January after serving his 10-week ban for breaking betting rules while Benzema proved his worth again, after being deemed fit enough to start following time out with a groin strain.

Atletico were far superior in the first half, stronger, more aggressive, better on the ball and with a clearer plan that restricted Real Madrid to one long-shot from Casemiro and a glancing Benzema header.

By then, Real were behind, the opening goal coming from a familiar combination down the right. Trippier played out from deep into the path of the excellent Marcos Llorente, who nipped the ball away from the diving Nacho Fernandez.

A poked pass behind Raphael Varane found Suarez and he flicked a superb finish with the outside of his foot around goalkeeper Thibaut Courtois and into the far corner.

Atletico won every challenge and loose ball but missed a second goal. Madrid wanted a penalty at the end of the half after the ball struck Felipe on the hand but the referee was unconvinced, even after consulting the monitor.

Real Madrid rallied and for a while the game opened up. Nacho went close at the back post before Yannick Carrasco twice got the better of Lucas Vazquez, the second time pulling back for Suarez, whose finish was blocked.

Angel Correa scuffed when free from six yards out.

Atletico appeared to have regained their authority but they failed to give themselves a cushion and tension grew.

Benzema fired over and then Jan Oblak pulled off an incredible double save, denying the Frenchman from point blank before getting up to block the rebound.

Two minutes remained when Benzema finally struck. He bundled through, the ball cannoning through kindly for Casemiro, who capitalised with an ice-cold pull-back for his team-mate, who had an open net.