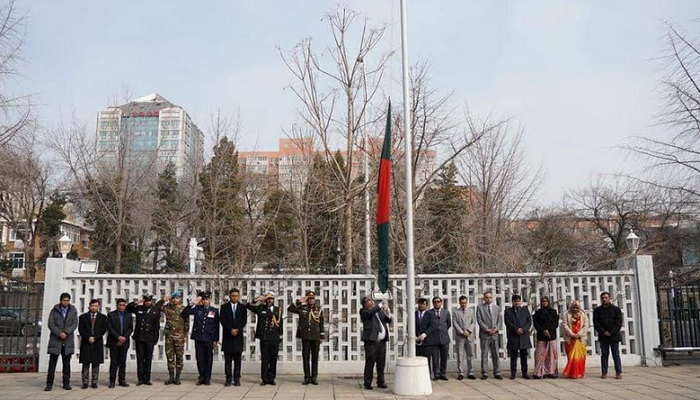 Bangladesh Embassy in Beijing celebrated the historic 7th March speech of the Father of the Nation Bangabandhu Sheikh Mujibur Rahman in a befitting manner.

This year the Day marks a special significance for Bangladesh, as the nation celebrates the golden jubilee of her independence and the birth centenary of the leader.

The historic speech delivered on this Day by this great leader and the greatest Bangali of all time had been the cardinal inspiration for the war Bangladesh fought in 1971, through which the country emerged as an independent nation.

The programme of the Day commenced with the hoisting of the flag by Ambassador Mahbub-Uz-Zaman in the presence of the Embassy staffs and Bangladesh community members.

This was followed by praying for the departed soul of Bangabandhu, his family members and the martyrs of the war.

After that, the Ambassador along with all officers and officials of the Embassy paid respect to the great leader by laying of a floral wreath at the portrait of Bangabandhu.

Messages from the President and the Prime Minister of Bangladesh on the occasion were read out.

This was followed by a discussion meeting and screening of documentaries on the occasion received from the Press Information Department (PID) of Bangladesh Government.

The crux of the programme was in the second session when a webinar in commemoration of the Day was held.

Professor Dr. Syed Anwar Husain, one of the most prominent historians of Bangladesh, current Bangabandhu Chair and Professor in the Bangladesh University of Professionals, and former Director-General of the Bangla Academy, delivered the keynote speech on “the Significance of the Historic 7th March Speech; Bangabandhu’s diplomacy and foreign policy,”.

Foreign diplomats, Bangladesh diplomats all across the Globe, representatives of the China Media Group (CMI), Teachers and Students of Beijing Foreign Studies University and other universities in China who are teaching and learning Bangla language, Chinese businessmen and investors, the business community of Bangladesh, Bangladesh community members and others attended the webinar.

Ambassador Mahbub-Uz-Zaman in his introductory remarks highlighted how through this historic 7th March speech, Bangabandhu inspired the whole nation to rise against the tyranny and oppression of the then military rulers.

In the Keynote speech, professor Dr. Syed Anwar Husain put the historic speech into the context of his political sharpness, acumen and diplomatic dexterity.

The professor said that because of his role in the freedom struggle as well as his overpowering charisma, Bangabandhu played the central role in policy formulation and making in the new state.

Bangabandhu made some significant statements that foreshadowed the foreign policy of Bangladesh, he added.

Ambassador Mahbub-Uz-Zaman wrapped-up the session and extended a vote of thanks.

The webinar was conducted by Dr. M. Nazrul Islam, Minister of the Embassy, said a press release of the embassy.