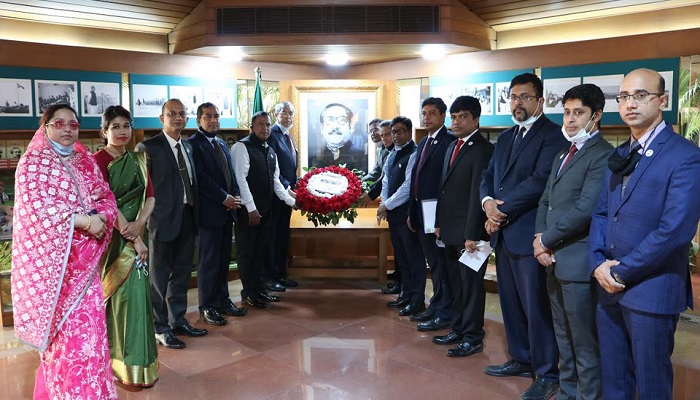 Bangladesh High Commission in New Delhi paid homage to Father of the Nation Bangabandhu Sheikh Mujibur Rahman on Sunday marking the historic March 7 speech which galvanised the people to prepare for the war of liberation.

He led the members of the mission to place a floral wreath at the portrait of Bangabandhu at the chancery building.

He also presided over a discussion meeting underlining the significance of the 18-minute speech that was recognised as the Memory of the World Register by UNESCO in 2017.

He reviewed importance of Bangabandhu’s eloquent speech on March 7, 1971.

“We are fortunate that we are going to celebrate the Golden Jublee of Independence under the Government led by Sheikh Hasina, the blood of Bangabandhu and the legacy of his ideals,” he said.

Muhammad Imran said the historic speech, delivered extempore before a sea of crowd at then-Race Course (now Suhrawardy Udyan) in Dhaka will remain ever inspiring for the people of Bangladesh as they work hard, under the leadership of Prime Minister Sheikh Hasina, to build Sonar Bangla as dreamt by Bangabandhu.

High Commissioner said Bangladesh is now the role model of development of the world.

Among the other speakers, the invited diplomats, prominent journalists and professors expressed their high appreciation on the progress of Bangladesh.

They paid their highest tributes to the memory of Bangabandhu Sheikh Mujibur Rahman.

The mission’s officers read out the messages from President Abdul Hamid and Prime Minister Sheikh Hasina.

A documentary was also screened on the historic speech of Father of the Nation Bangabandhu Sheikh Mujibur Rahman, which he delivered on the March 7, 1971.

Later, a cultural programme was held in the evening at Maitree Hall of Bangladesh High Commission.

The programme was attended by number of ambassadors, diplomats, local elites and media personalities.