Bangabandhu’s Historic March 7 Speech: An epic about our independence 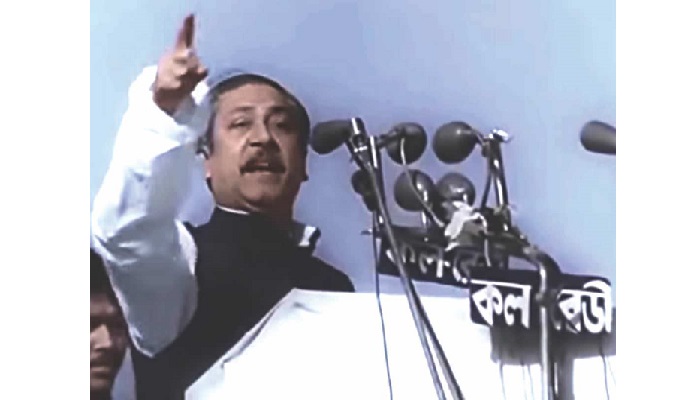 The historic March 7 speech, delivered by Bangabandhu Sheikh Mujibur Rahman, was the Magnacarta of the freedom-loving Bengalis. The epic speech was an inspiration for the Bengalis to break the sickles of the Pakistanis.

It was an early sunny afternoon on March 7 in 1971. Tens of thousands of Bengalis thronged the Race Course Maidan (now Suhrawardy Udyan) in Dhaka from across the then East Pakistan to get directives from their leader Bangabandhu Sheikh Mujibur Rahman on how to deal with the Pakistani rulers who had refused to accept the 1970 election results.

On the eve of the 101th birth anniversary of Bangabandhu, the nation is set to observe the country’s red-letter day today in a befitting manner.

In his 19-minute extempore epic speech, Bangabandhu directed the freedom-loving Bangalees to wage a decisive struggle against the Pakistani rulers.

Starting from 4:23pm, Bangabandhu unequivocally said, “We shed our blood...We are ready to shed more blood. The people of the country shall be freed, Inshallah!”

Begum Fajiluttunessa Mujib, who was martyred with Bangabandhu on a fateful night of August 15 in 1975, always helped her husband with pieces of political advice, including the day the ‘Magnacarta’ of Bangladesh was delivered, according to their elder daughter Prime Minister Sheikh Hasina.

During his deliberations amid thunderous slogans and applause, he also made a clarion call to the people from all walks of life to prepare for an armed struggle against tyranny, exploitation, subjugation and deprivation with whatever they had and to turn every house into a fortress.

People were overwhelmed and imbued with the spirit of Bangabandhu’s speech.

The whole nation responded from their heart and soul with a thunderous slogan ‘Brave Bangalees take up arms, achieve independence for Bangladesh’.

It was the prestigious acknowledgement to one of the world’s most glorious speeches, through which Bangabandhu effectively declared the country’s independence in a mammoth public rally at Ramna Racecourse Ground (now Suhrawardy Udyan) in Dhaka on March 7, 1971.

The speech provided inspiration and courage to the Bengalis in their quest for freedom and energised freedom fighters for freeing the country in the nine-month bloody War of Liberation.

The speech changed the course of the country’s history, inspiring people to prepare for the Liberation War, which began after the Pakistani military on March 25 launched its Operation Searchlight on unarmed Bangalees and launched genocide for the next nine months. It is considered to be the worst genocide in human history.

As soon as the Bangalis were attacked, Bangabandhu formally proclaimed the independence of Bangladesh.

President Abdul Hamid called upon all irrespective of party affiliations to contribute from their respective positions in implementing the ‘Vision-2021’ and ‘Vision-2041’ undertaken by Prime Minister Sheikh Hasina to make Bangladesh a prosperous country.

“I urge all to continue their efforts to materialise dreams of Father of the Nation Bangabandhu Sheikh Mujibur Rahman to turn Bangladesh into a ‘Sonar Bangla’,” the President said in a message on the eve of the historic March 7.

Noting that Bangabandhu’s lifetime dream was to turn the independent-sovereign Bangladesh into a prosperous ‘Golden Bangla’, he added: “We must continue our efforts to fulfill that dream of our great leader.”

On the occasion of Bangabandhu’s birth centenary and the golden jubilee of independence, President Hamid said Bangabandhu’s March 7 speech was one of the most celebrated speeches in the world, which was a great efficacious message to the freedom-seeking people to make them jump into battle breaking the chains of subjugation.

“How an address can awaken the whole nation, inspire them to leap into the War of Liberation for Independence, Bangabandhu’s ‘historic 7 March Speech’ is a unique example,” the head of the state observed.

Prime Minister Sheikh Hasina said Bangabandhu’s historic March 7 speech was the source of immense power for people to motivate them in the struggle of independence of Bangladesh.

The heroic struggle of the Bengalis and the direction of this speech of the Father of the Nation in the armed liberation war was the keynote of the thunderous national unity at that time, she said in a message on the eve of the historic 7th March.

“This speech of Bangabandhu is an essential and undeniable chapter of our history and national life, the appeal of which is immortal,” she added.

She hoped that the speech will always inspire the exploited, deprived and freedom-loving people of the world.

The appeal of Bangabandhu’s March 7 speech is everlasting and it would continue to motivate the deprived, exploited and freedom-loving people of world always, she said.

Referring to the inclusion of the 7th March speech of Bangabandhu into a world famous book titled “We Shall Fight on the Beaches: The Speeches That Inspired History” by Jacob F Field, the premier said that the speech is one of the greatest political speeches in the world according to political analysts.

She described recognition of the speech by the UNESCO as a World Documentary Heritage in the Memory of the World Register as a great achievement for the Bangalee nation and the country.

“Time from March 17, 2020 to March 26, 2021, has been celebrated as Mujib Year. Now we are implementing the unfinished tasks of the Father of the Nation. Bangladesh is now a role model in socioeconomic development,” the premier said.

Recalling the historic March 7, she said this day in 1971, Bangabandhu in his historic speech at a mammoth rally in the then ‘Race Course Maidan’, now Suhrawardy Udyan, in the city directed the freedom-loving Bangalees for waging a decisive struggle against the Pakistani occupation force.

Sheikh Hasina said sensing an inevitable war, Bangabandhu also advised the nation to get prepared for the war of independence with whatever they have in their hands.

Different socio-cultural and political organisations and students’ and professional bodies have also chalked out elaborate programmes, including placing of wreaths at the portraits of Bangabandhu and holding of discussions and rallies.

Bangladesh Betar and Bangladesh Television as well as private television channels and radio stations will broadcast and telecast special programmes while national dailies will bring out special supplements, marking the auspicious occasion.

Prime Minister Sheikh Hasina is scheduled to join the national programme at 3:00pm at Banagabandhu International Convention Centre in the capital.

The party will hold a discussion programme at 3:00pm at its central office on Bangabandhu Avenue in the capital.

Awami League president and Prime Minister Sheikh Hasina is scheduled to preside over the programme virtually.