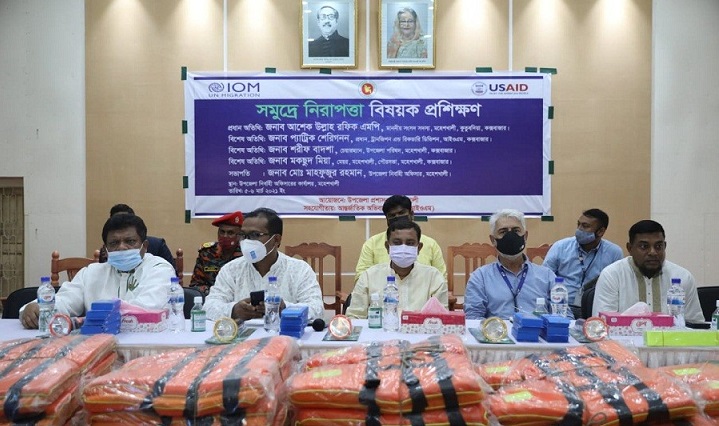 Cox’s Bazar – Between 5-6 March, the International Organization for Migration (IOM) in coordination with the Moheshkhali Upazila administration and other governmental bodies conducted a “Safety at Sea” training for 200 boatmen based on the island of Moheshkhali, with the support from Bureau of Humanitarian Assistance (BHA).

The Cox’s Bazar – Moheshkhali sea route is one of the most important routes in this region, used frequently by development agencies and tourists alike. Similarly to Cox's Bazar’s mainland, the island of Moheshkhali is extremely prone to natural hazards such as cyclones. According to the District Administration, nearly a third of the 300,000 people living on the island are at risk.

“Seeing as the Moheshkhali– Cox's Bazar sea route is highly impacted by cyclones, we are grateful for this initiative of sensitizing our boatmen on sea safety,” declared Mr. Asheq Ullah Rafiq, Member of Parliament of Cox's Bazar-2 constituency.

“Several hundred boatmen are actively working on the Cox’s Bazar–Moheshkhali sea route, but they haven’t had access to any proper training on safety at sea so far. It is imperative for them to have access to this type of life-saving capacity building activity,” explained Patrick Charignon, IOM Cox’s Bazar Transition and Recovery Programme Coordinator.

The training was organized in two batches, for 100 participants each day. Members of the Upazila and Union DMC in Moheshkhali also participated in the training. After completing their respective module, IOM provided the boatmen with sea safety equipment.