Bhasan Char is a safe home for the Rohingyas: Study 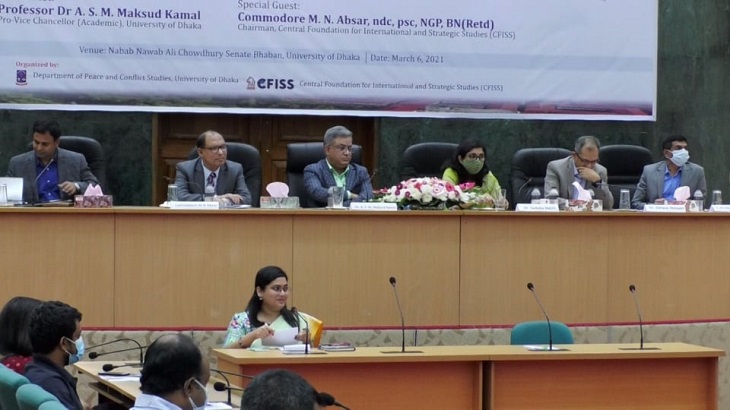 A recent study jointly conducted by Peace and Conflict Studies department of Dhaka University (DU) and Central Foundation for International and Strategic Studies (CFISS) has found that Bhasan Char island in Noakhali district is much more safer place for the Rohingyas compared to the camps in Cox’s Bazar.

Bhasan Char is certainly a better place for the Rohingya displaced people, compared to the camps in Cox’s Bazar. The island has all the facilities necessary for their temporary relocation until their repatriation to Myanmar, the study said.

The findings of the comparative study titled “Relocation of the Rohingya Displaced People from Cox’s Bazar to Bhasan Char: Opportunities and Challenges” were disseminated at a programme held at Nabab Nawab Ali Chowdhury Senate Bhaban of Dhaka University (DU) on Saturday.

According to the study, the camps in Cox’s Bazar are amongst Bangladesh’s most vulnerable areas, with a poverty rate far exceeding the country’s national average. This place is now accommodating around 1.1 million Rohingyas who have fled their country due to the persecution of the Myanmar Army. The camps are filled beyond its carrying capacity, with only 10.7 square meters of usable space per person.

Besides, ineffective planning, coupled with mismanagement of water, sanitation and hygiene facilities, has led to environmental degradation in the area. In consequence, Cox’s Bazar Rohingya camps are very cramped, jam packed due to overpopulation which makes the lives of the Rohingyas vulnerable.

On the other hand, Bhasan Char is very planned and built with adequate space for every individual which provides better living conditions for the Rohingyas.

The study also reveals that the infrastructure of the makeshift camps  in Cox’s Bazar, where the Rohingya families are living, is not stable due to over population and congestion. Since, the camps have been built by cutting down hills, they remain in risk of being buried in landslides.

Another concerning issue is that increased deforestation also amounts to severe environmental degradation in the area.

On the contrary, experts on geology and geomorphology opined that the mainland and build up areas of Bhasan Char are considerably stable.

The island has a three-staged embankment system in place to protect the island, there are wave breakers which have been installed to weaken the waves. In order to protect the site from tidal floods and natural disasters, a 9-feet high and 12.1 km long double embankment has been built on the island which is being enhanced upto 19-feet in height.

Bhasan Char provides excellent area where the security is looked after by the constant presence of the law enforcement agencies and absence of criminal gangs in the area. Internal and external security measures in Bhasan Char are maintained through the installation of security cameras, perimeter fences, watch towers and police posts.

The project site has already been developed with 120 plots. Each plot consists of 12 buildings including cyclone centers, educational institutes, mosques etc. Each cyclone center can withstand strong winds of up to 260 km per hour and will accommodate 1000 people and 200 cattle in an emergency. Additionally, there are buildings for the NGOs and international organizations. Spaces have also been allocated for a day-care center, orphanage and guest houses, the research finds out.

Although there are limited scopes of earning in  the existing Rohingya camps in Cox’s Bazar, there will be very means of livelihoods in Bhasan Char. The possible ways of earning available are, fishing, poultry farming, sheep and cattle rearing, cultivation of rice and vegetables, carpentry handicrafts, tailoring and providing different community services. Shops have also been set up in the designated market places and Rohingyas can conduct small business in the island as well, the study said.