Sundar's 96 puts India in command of the fourth Test 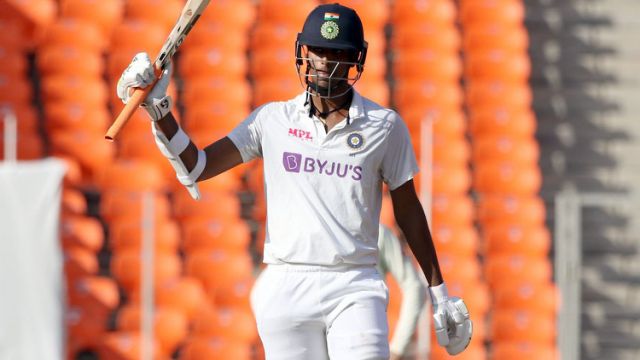 Washington Sundar hit an unbeaten 96 as India finished their first innings with a lead of 160 on day three of the fourth Test on Saturday.

India, who resumed on 294-7 in response to England's 205, were finally bowled out for 365, with Sundar stranded four runs from his century in Ahmedabad.

England, who trail 2-1 in the four match series, were six for no loss at lunch. Zak Crawley and Dom Sibley were batting.

Mohammed Siraj was hit on the left thumb while trying to stop a fierce Crawley strike off his own fast bowling and walked off the ground in acute pain as players went to lunch.

Sundar put on 106 runs for the eighth wicket with Axel Patel, who made 43, to add to England's agony.

The all-rounder moved from his overnight 60 to surpass his previous Test best of 85 in just his fourth match.

Patel was run out at the non-striker's end and fast bowler Ben Stokes returned to take the final two wickets and finish with four from the innings.

Wicketkeeper-batsman Rishabh Pant hit 101 on Friday to lift India from a precarious 146-6 in a 113-run stand with Sundar.

India need to avoid defeat to book a meeting with New Zealand in the World Test Championship final at Lord's in June.