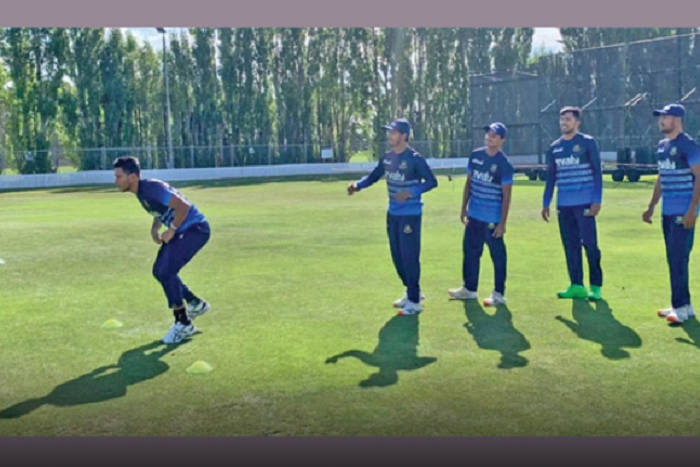 A Bangladesh Cricket Board official on Friday confirmed that their ongoing tour of New Zealand will go on as per the scheduled plan although the country was hit by a massive earthquake as well as there were alleged threats of a terror attack.

A tsunami warning for coastal areas in New Zealand was issued and later withdrawn after the northeastern coast of the country was hit by a powerful earthquake on Thursday night.

“At 02:27am local time Friday, a magnitude 7.3 earthquake was felt near the east of New Zealand’s North Island. This was followed by a Tsunami warning for mainly the coastal areas of North Island,” Jalal Yunus, team leader of Bangladesh contingent was quoted in a press release provided by BCB.

“Christchurch is in the South Island and is a long distance away from the epicentre of the quake. Nevertheless, the Bangladesh Team management has been in contact with the local authorities who have assured that there was no reason for alarm in this part of the country,” it added.

Yunus assured that all the members of the Bangladesh contingent were safe and sound and they would continue their routine work like the previous days.

“All team members are well. The day’s activities have continued as usual with the players joining their respective group training at Lincoln Green,” he said.

Yunus added that there is no reason to push the panic button after a 27-year-old man has been charged after he allegedly made a series of online posts threatening a terror attack in Christchurch involving car bombs on March 15 – the second anniversary of the mosque massacre.

Bangladesh team postponed their last series in New Zealand after they cancelled the third Test following a terror attack in March 2019.

According to a local newspaper, Police confirmed a 27-year-old man had been charged with threatening to kill and he would appear in the Christchurch District Court on Friday morning.

Police said further charges against the man were being considered for the threatening post that included a threat to attack the Masjid An Nur (or Al Noor mosque) on Deans Ave on March 15.

According to police officials on Sunday night, a person made a series of posts on the site using a similar online name to that used by the Australian terrorist who fatally shot 51 people at two Christchurch mosques on March 15, 2019.

The person said they were “originally English”, but grew up in South Africa before moving to New Zealand in 2009.

Police searched the two properties after receiving information from a member of the public regarding “concerning communications on the 4chan site”, an anonymous online message board known to be frequented by far-right individuals. The other man was released without charge.

“We have seen the news (man being charged for posting online threats) but there is no need to push any panic button,” said Yunus.

“We are having constant communication with the government and they are taking care of us from every aspect including our security,” he concluded.