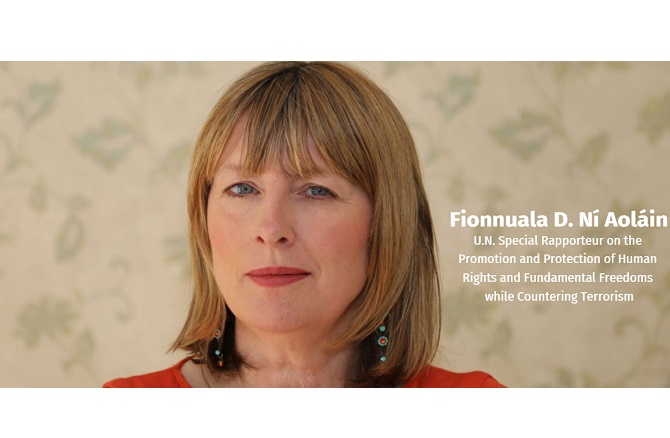 A UN expert said on Thursday said counter-terrorism law and policy is negatively affecting the human rights of women and girls around the globe, undermining equality gains and limiting the exercise of women’s fundamental freedoms.

“Twenty years on from 9/11, we find that counter-terrorism has infiltrated the most intimate spaces of personal rights and autonomy for women and girls,” Fionnuala Ní Aoláin, the Special Rapporteur on the protection and promotion of human rights and fundamental freedoms while countering terrorism.

“Counter-terrorism policy and practice in multiple countries deliberately targets women human rights defenders and those claiming sexual, reproductive and equality rights for women and girls and uses the full force of the security state to shut down and choke their claims.”

In a report to the 46th session of the Human Rights Council, the Special Rapporteur addressed a range of practices, including sanctions, detention, citizenship deprivation, return and repatriation, the role of family law and family courts, challenges faced by women HRDs in preventing and countering (violent) extremism policy, and the impact of surveillance and new technology on women, girls and families.

“Security experts use the language of gender, not to empower women and girls, but rather to commodify and undermine their rights through practices of securitisation, marginalisation, and co-option,” Ní Aoláin said.

The Special Rapporteur said she is particularly concerned that families are the new frontier of security regulation, impinging on the most intimate and fundamental of human relationships.

She highlighted the “unique and systematic inequalities being faced by certain families, specifically Muslim families and Muslim mothers, who are being pressed to function as the security arm of the State in multiple countries”.

The expert called for the full and equal protection of all families as established by human rights law, and an end to practices that exclude, stigmatise and render certain families unequal as a result of security policy.

Ní Aoláin urged the United Nations Counter-Terrorism entities and the Global Counter-Terrorism Coordination Compact to “meaningfully engage with a women’s rights agenda and not merely use the word ‘gender’ in their counter-terrorism technical support and capacity building to States”.

The Special Rapporteur also stressed the need to repatriate and reintegrate women and their children from inhumane conditions in camps in north-east Syria.

“Women and children are being arbitrarily detained in a situation that meets the threshold of torture, inhuman and degrading treatment under international law.” “The time to act is now. States with third country nationals in the camps are past excuses, recriminations and passing responsibility onto others,” she said.