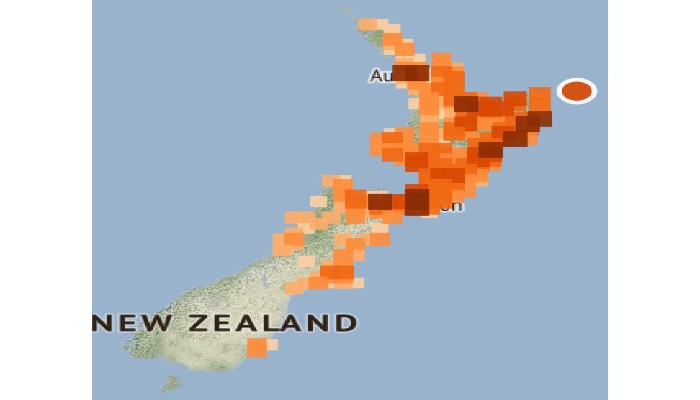 The National Emergency Management Agency says residents who evacuated after an early morning tsunami warning - which followed a 7.1 magnitude earthquake that shook much of the country - can now return to their homes.

"Based on current scientific advice and information from coastal tsunami gauges there is no longer a threat to land areas. People who have evacuated can now return home," the agency said in a tweet just after 5am, reports New Zealand Herald.

"There is no need to evacuate other areas unless directly advised by local civil defence authorities. Coastal inundation (flooding of land areas near the shore) is no longer expected as a result of this event."

While the land warning has been lifted, a marine warning is still in place.

The agency says strong and unusual currents and unpredictable surges are still expected in coastal areas.

Strong currents and surges can cause harm including injuries and drowning, it says.

People in or near the sea in these areas should move out of the water and off beaches or shore areas.

This includes moving away from harbours, rivers and estuaries.

The agency says there is no need to evacuate other areas unless advised by local civil defence authorities.

Coastal flooding is no longer expected.

The agency had earlier issued a tsunami warning for New Zealand coastal areas after the massive earthwuake, which was centred off the East Cape.

It had asked people near the coast from Cape Runaway to Tolaga Bay to move to higher ground. Police say they are now conducting "reassurance" patrols along the East Cape this morning to help those who evacuated.

Geonet reported the 7.1 magnitude earthquake struck near 95km east of Te Araroa, in the North Island, at 2.27am, causing 'severe' shaking.

It was originally reported as a 7.4m quake, then downgraded.

The intensity of the quake was described as severe.

The quake was felt across New Zealand, with people in Auckland, Wellington and even Christchurch reporting the shaking.

The National Emergency Management Agency said the first waves may have reached New Zealand in the areas around East Cape about 3.14am.

"Tsunami activity will continue for several hours and the threat must be regarded as real until this warning is cancelled."

Strong and unusual currents and unpredictable surges near the shore are expected in all coastal areas of the North and South Islands, Great Barrier Island and Stewart Island.

Hawke's Bay Civil Defence says there is "no land threat to Hawke's Bay".

"You may return home if you have evacuated," it said on Facebook.

They advised people to stay away from the foreshore and out of the water because a marine threat was still in place.

Fire and Emergency NZ had this morning implemented tsunami procedures across eastern coastal regions as a precaution.

There have been 15 smaller earthquakes since the 2.27am jolt, ranging from magnitude 5.4 to 4.4, also centred near the East Cape.

"She was a beauty, it really shook. I'm quite frightened, I've got no idea if there's going to be a tsunami, it was massive," Rex from Gisborne told Newstalk ZB's Bruce Russell, adding he had not heard any warning alarms after the shake.

One Twitter user from Wellington described the first earthquake as "terrifying".

In tears on Newstalk ZB, Helen in the Chatham Islands said: "It's the biggest one I've ever felt. It went on and on and on. I'm in the old stone house and I didn't know where to stand because it's all rock. I've never felt one so big - it must be massive across New Zealand. It died down and then went on and on again."

Janice in Napier told the station: "I'm still shaking. I was lying in bed ... and the next minute, the quake comes in and it lasted for ages. The biggest one I've felt. This was one jolt and it kept going. I eventually got up and sat under the doorway, oh my God."

And Eric in Manawatu said: "It woke me up. It was a rattle, and the house was swaying a bit. But it went on and on - it kept going. It wouldn't stop. I thought, OK what's next?"

Prime Minister Jacinda Ardern has posted on Instagram: "Hope everyone is ok out there - especially on the East Coast who would have felt the full force of that earthquake".

‌Harry in New Plymouth told Newstalk ZB: "That was a bit of a doozy. I felt it as clear as if it was happening underneath. It woke me up... I have the map in front of me, she certainly was a jolt. To be that far away and it still got to us. If you are near the water folks, get away."

Beck Vass said on Twitter it "was very long and wobbly in Tauranga".

By 3.15am more than 60,000 people had reported feeling the quake via Geonet's website.

Some people on social media reported feeling the quake as far as Dunedin and Greymouth.

Director general of health Ashley Bloomfield was also woken by the quake and shared advice on Twitter from Civil Defence.