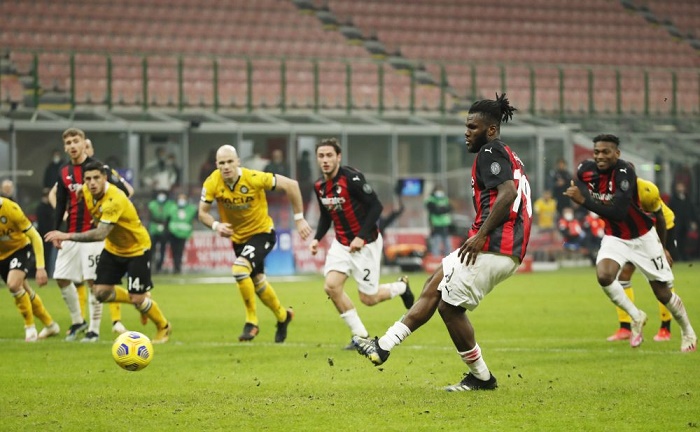 Franck Kessie scored a 97th-minute penalty to rescue a 1-1 draw for AC Milan at home to Udinese on Wednesday, giving Serie A leaders Inter Milan the chance to pull six points clear at the top.

But a needless handball from Udinese substitute Jens Stryger Larsen offered Milan a lifeline, with Ivorian international Kessie converting the penalty with the final kick of the match.

"When you get there, you have two choices: you mustn't feel fear or uncertainty, otherwise you will get it wrong.

"I was not afraid and I scored."

Milan struggled to create many genuine chances in the absence of top scorer Zlatan Ibrahimovic, the Swede sidelined by a groin injury picked up in last weekend's victory over Roma.

Ibrahimovic will miss Milan's trip to his former club Manchester United in the first leg of their Europa League last 16 tie, but of greater concern is the club's dip in form domestically.

Udinese goalkeeper Juan Musso made good saves from Kessie and Samuel Castillejo early in the second half, but it was the visitors who should have taken the lead when Ilija Nestorovski's header was cleared off the line brilliantly by Alessio Romagnoli.

Brazilian centre-back Becao nodded Udinese ahead at a corner on 68 minutes, Donnarumma seemingly distracted by two players jostling in front of him as the ball floated past the Milan keeper.

However, the hosts snatched a point at the death through Kessie to stay within three of city rivals Inter ahead of their game away to Parma on Thursday.

Atalanta occupy the final Champions League spot and are two points clear of Roma, who needed a late winner from Amadou Diawara to secure a 2-1 victory at Fiorentina after Leonardo Spinazzola had scored at both ends.

"It was very important that we get the win this evening," Roma boss Paulo Fonseca told Sky Sport Italia.

"After the defeat to Milan, the team reacted well. It's important for us to understand what we need to improve and how we must react to setbacks."

Francesco Caputo's stoppage-time penalty earned Sassuolo a dramatic 3-3 draw against Napoli, as Gennaro Gattuso's side dropped vital points in the race for the Champions League places.

Sassuolo twice led through a Nikola Maksimovic own goal and Domenico Berardi penalty. Piotr Zielinski's fine strike had levelled for Napoli who then went in front courtesy of Lorenzo Insigne's 90th-minute penalty following an equaliser by Giovanni Di Lorenzo.

Cagliari, who sacked Eusebio Di Francesco last week after a 16-match winless run, recorded their second victory in a row under his successor Leonardo Semplici as they defeated Bologna 1-0.

Benevento continued their slide down the table following a 3-0 loss against Hellas Verona, while Genoa and Sampdoria drew 1-1.

On Tuesday Juventus gave their hopes of a 10th straight Serie A title a timely boost as they beat struggling Spezia 3-0 to move within seven points of Inter.