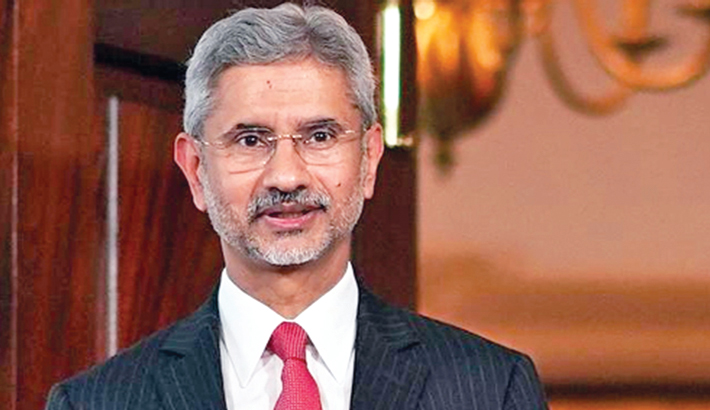 He is coming to Dhaka at the invitation of his Bangladeshi counterpart AK Abdul Momen for a brief but important trip as all eyes are now fixed on the Indian premier’s upcoming visit. This will be Modi’s first trip to any foreign country since the outbreak of Covid-19 pandemic.

Bangladesh, which is set to celebrate the golden jubilee of its independence, looks forward to the Indian prime minister’s visit this month to take forward the bilateral relations to the next level.

“This visit of Indian External Affairs Minister to Bangladesh follows the prime minister-level virtual summit held between two countries on December 17, 2020 and will also provide an opportunity to take stock of the progress in bilateral relations,” said the Ministry of External Affairs (MEA) in a statement on Wednesday.

This is Jaishankar's second visit to Dhaka as external affairs minister. As per the programme schedule, Jaishankar will arrive at Bangabandhu Airbase in Dhaka at 10:00am by a special aircraft.

After the bilateral talks, the two foreign ministers will make joint press statement. Later Jaishankar will attend a lunch to be hosted by his Bangladesh counterpart.

The Indian external affairs minister will call on Prime Minister Sheikh Hasina at Ganobhaban at 4:00pm.

Later, he will attend a programme at India House in Gulshan and meet the editors and senior journalists at the High Commission of India at 5:00pm. He is scheduled to leave Dhaka at 7:00pm.

The Indian premier was earlier scheduled to visit Dhaka in March 2020 but the trip was called off due to the Covid-19 pandemic.

There has been increased engagement between the two countries in the last few years. The two prime ministers held virtual summit meeting on December 17 when Modi described Bangladesh as an important pillar of India’s ‘Neighbourhood First’ policy.

During the summit, Bangladesh Prime Minister Sheikh Hasina paid rich tribute to the Indian Armed forces and thanked India for the support for liberation of Bangladesh from Pakistani occupation forces in 1971.

The two sides signed seven agreements at the summit in areas ranging from hydrocarbon to agriculture and revived a cross-border railway line that was snapped 55 years ago, giving a boost to connectivity initiatives and energy cooperation.

The key focus has also been on reviving the pre-1965 connectivity links. The December virtual summit saw the opening of the Haldibari-Chilahati rail link connecting Bangladesh with the Indian state of West Bengal.

Amid the corona pandemic, India sent two million doses of Covishield vaccine produced by the Serum Institute of India to Bangladesh as gift under the ‘Vaccine Maitri’ initiative. Later commercial consignments also began.

Also for the first time, a 122-member smart contingent of Bangladesh Armed Forces comprising the members of Bangladesh Army, Navy and Air Force participated in the Republic Day Parade of India on January 26 to commemorate 50 years of its historic liberation of Bangladesh.

Earlier, Indian Foreign Secretary Harsh Shringla made his first foreign visit amid the pandemic to Dhaka on August 18 last year and handed over a personal message from Modi to Prime Minister Sheikh Hasina.