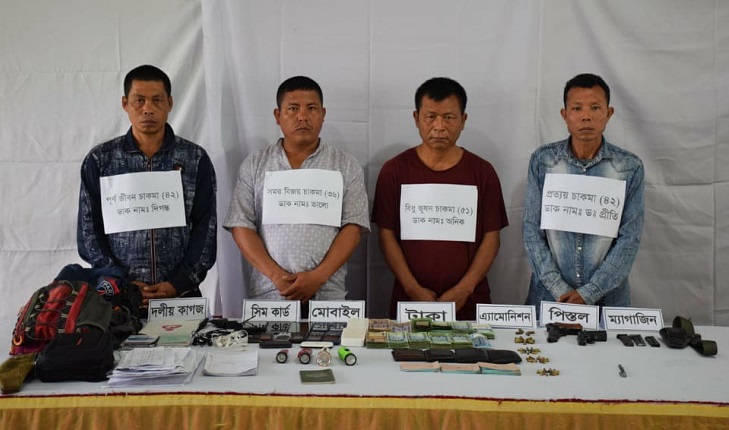 They were arrested from Banchhara (Fresh Bazar) area of Dighinala upazila in the early hours of Tuesday, according to intelligence sources.

An army patrol team of Dighinala Zone conducted the operation in Banchhara (Fresh Bazar) area on the basis of intelligence information that UPDF activists were organising and distributing extortion money. During the drive they held four UPDF (Prasit faction) members from the spot.

Two foreign pistols, 40 rounds of ammunition, 10 mobile phones, four extortion collection receipt books, Tk 5.74 lakh collected through extortion and some documents of their party were recovered from their possession.

Locals identified them as local activists of the UPDF led by Prasit Bikash Khisa. During preliminary interrogation they confessed to being involved in extortion.

Locals said since the removal of the security forces temporary camps, the tribal regional groups engaged in armed activities in the so-called rights movement in the hills have once again and become desperate.

The detainees and all the recovered weapons were handed over to Dighinala police station.

ASI Zahid Hossain, duty officer of Dighinala Police Station, confirmed the matter and said, “The process of sending the four UPDF activists to court is underway.”

Meanwhile, UPDF (Prasit faction) has sent a letter of protest to the media, acknowledging the detainees as its own workers. In a statement signed by Niron Chakma, in-charge of the party’s publicity and publications department, Khagrachhari district organizer Angya Marma demanded immediate and unconditional release of the four arrested members.