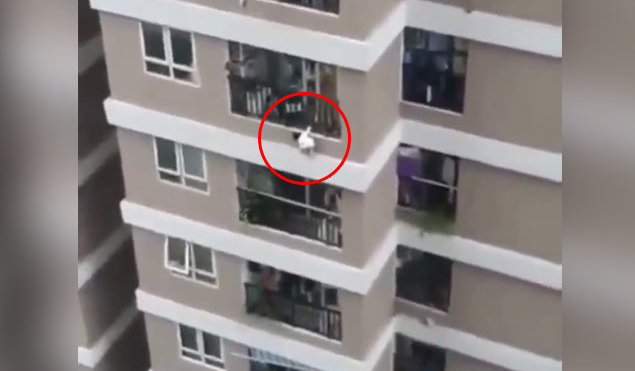 A delivery driver in Vietnam has been hailed a hero for springing into action to save a toddler who fell from the 12th storey balcony of her building. Nguyen Ngoc Manh, 31, was sitting in his truck waiting to deliver a package in Hanoi when he heard a girl crying, reports Daily Mail.

The incident occurred on Sunday at around 4.30 PM. Mr Manh initially thought it was a child having a tantrum, until he heard other people screaming.
He rolled down the window and saw that the two-year-old girl was dangling from the 12th floor, just about to fall down.

The father of two jumped into action and scaled the six-foot wall that separated him and the building from which the toddler was dangling.

"I scaled the wall and saw that she could fall onto the metallic roof of the house used to store electric generators for the complex, so I tried to climb on top of it," he told VN Express International. Though he managed to get on the roof, Mr Manh lost his footing and slipped right as the girl plunged down from her balcony.

Miraculously, he managed to grab hold of her and she landed on his lap. The impact of the fall was such that it left a dent on the roof.
Hair-raising footage of the incident has gone viral on social media, where many have praised the delivery driver for his quick thinking and courage.

The entire ordeal lasted two minutes, and the girl was rushed to the hospital. A doctor said on Monday morning that she had dislocated her hip but suffered no other injuries. She will now wear a cast until she recovers.

Mr Manh, meanwhile, suffered a sprain in his arm. "Everything happened within a minute," he told VN Express, adding that he acted instinctively to save the girl.

Addressing the compliments he has received on social media, he said: "I don't see myself as a hero. I just want to do good."