Durand Line in a Glance 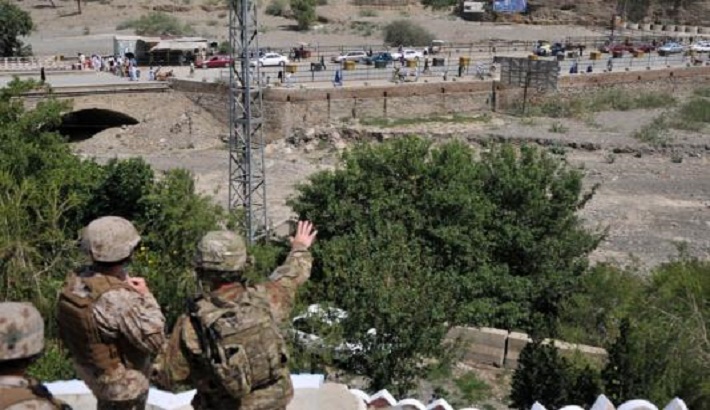 Since 1893, especially after the formation of Pakistan onward Durand Line is remained as an important eliminate in the foreign policy of Afghanistan. For Afghanistan, Durand Line is considered losing Pashtun’s territory and losing two-three percent of the population of its largest tribe. Based on Pakistan’s official census the population of the Pashtuns living on the other side of the line estimated to around 40 million, marking the second largest tribe- following Punjab the first largest tribe- in Pakistan. With losing Baluchistan territory, Afghanistan lost its direct access to the Arabian and Indian Sea. As it is oblivious, the Afghan governments have not recognized Durand Line as border between the two countries in the past 125. The Afghan government also provided facilities for the commute of tribal areas to Afghanistan. With the establishment of the Islamic Republic of Afghanistan in 2001, the policy regarding Durand Line was that resolving the issue lies on the tribes living on the two sides Durand Line and that the Afghan government is not authorized to make any decision about it. President Hamid Karzai on Savor 14, 1392 AH in a conference in Kabul said that the Pakistan’s attacks on (the areas located across the Durand Line) have two reasons behind: First, to prevent the development of Afghanistan and second to put pressure for legitimated recognition of Durand Line. “The second reason could be to press the people of Afghanistan to set on negotiations on Durand Line and recognize the Line,” Karzai said. He furthered that any kind of effort to prevent development in Afghanistan and pave the ground for Durand Line recognition would be failed. “Those who are involved in these cruelty and violence will not reach any victory. The Afghan nation since has not recognize (Durand Line) since the (British India) created it the line, has not recognize it. (Deutsche Welle Website).

For Pakistan Durand Line is a vital important subject. The disputed areas include almost 60 percent of Pakistan’s soil. The prospect that Pakistan would voluntarily admit the decision of the International Court to return the confiscated territory is absolutely rare. On the other hand, global forces such as US, British and China would seriously oppose the issue in support for Pakistan. During the time of the cold war- when Afghanistan and Soviet Union signed a friendship treaty- it was similar to the Pakistan’s military alliance with US- these two regional and international subjects cause Durand Line to remain unsolved and does not come under serious attention.

In the wake of the Saratan 26, 1353 AH coup followed by Sawor 7, 1357 coup, some political elites provided a golden chance for the Pakistani government to destabilize the Afghan government,  abolish the government’s infrastructure and national army; and therefore, Afghanistan would not be as powerful to lopsidedly determine the borders with Pakistan.

With the establishment of Mujahideen in 1992, Pakistan reached its goal to destroy the country’s infrastructure, security forces and eventually placed the Taliban regime of medieval centuries. After the formation of Islamic Republic of Afghanistan based on Bonn conference Pakistan has not plunder any opportunity to destabilize Afghanistan.

There are people hoping for the formation of Great Afghanistan with the unification of Pashtuns and Baluches living on the other side of Durand Lind.

Considering Pakistan’s great number of population, strong army and developed economy, the possible ways of regaining the confiscated territory for Afghanistan are as bellow:

Collapse of Pakistan most probably as a result of its fourth war with India Igniting a civil war in Pakistan Declaring a civil revolution in Pakistan Or all the above possibilities.

To prevent the above scenario, Pakistan needs a foreign alliance. This alliance was once America and is now China playing the role to protect Pakistan against India.

The latest (peaceful revolution) of millions of Pashtuns under the title of “Pashtun Tahfuz Movement” led by Manzoor Ahmad Pashteen, brought great hopes among the fans of “Great Afghanistan”. This revolution is on the rise and didn’t reach the necessary format and determined goals. The goals announced by PTM are set for justice and equality- considering Pashtuns equal to all other tribes in Pakistan. The leaders of the movement have constantly expressed criticism on Pakistani government for blocking the transit paths to Afghanistan, claiming that this policy cause breakdown in economical situation of tribal areas (FATA). They said the Punjabi leaders have always opened the Waga Port with India despite political controversies with Delhi but in the contrary they have been repeatedly blocking the paths to Afghanistan. Gen. Asif Ghafor, head of the Pakistan army earlier accused the Afghan government of supporting the PTM. He is also concerned on the support of Afghan Pashtuns to PTM in social media. (Gandahara British Website 11 April 2018).

Outcomes and practical ways to solve the problem

The recognition of Durand Line by Afghanistan in return for Pakistan denouncing support to the Taliban group; is an absolute cheap-possible way to find a resolving for the issue. Durand Line is an honor issue for the Afghan government. On the other hand, the Pakistan government never concedes its supports to the Taliban’s violence, (and provides safe havens and training camps for the group) and resolving the issue throughout mutual negotiations; for example agreement on a referendum among Pashtuns and Baluches tribes under UN monitoring and provide them with the right to decide whether they want the prolonging of Pakistan’s governance, rejoin with Afghanistan or remain political independent.

The second resolving is the only logical way; and in accordance to the Pakistan’s claim – of saying that the Pashtuns and Baluches living under the British Colonial and Pakistan governance in Pakistan during 125 years, are completely merged culturally, politically and administratively with other people in Pakistan, including Punjabis and Sindhs, Pakistan should not see any problem in regards. But the possibility of declaring their political independency and forming an independent country by the Pashtuns and Baluches appears high, and therefore, it seems impossible for Pakistan to agree on.