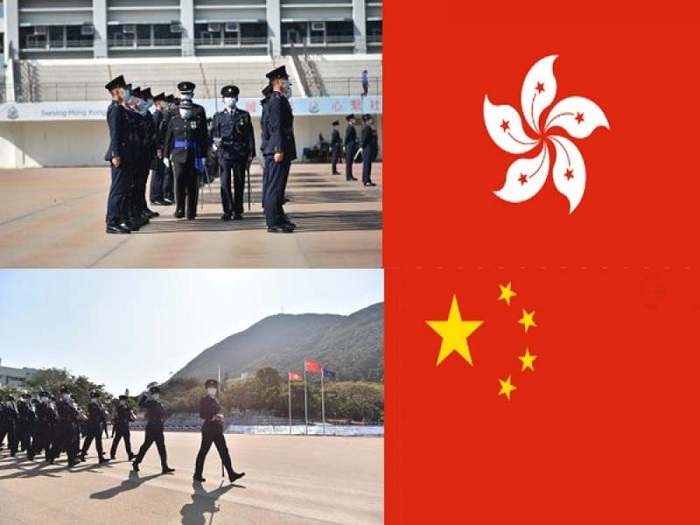 Commissioner of Police Chris Tang Ping-keung’s comments on Tuesday came after a government source told the South China Morning Post the skills acquired from the unprecedented training sessions would be deployed at the handover parade on July 1, 2022 for the 25th anniversary celebrations of the city’s return from British rule for the first time.

The Union, however, stopped short of rolling out major sanctions on the city’s officials for the continued squeeze on opposition figures.

Hong Kong was high on the agenda of the meeting of the EU’s Foreign Affairs Council, comprising the bloc’s 27 foreign ministers and senior EU officials, with Brussels’ top diplomat, Josep Borrell, referring a situation in the city that “keeps deteriorating”, The South China Morning Post reported.

At a press conference after the meeting, Borrell confirmed agreement on a “two-step process” that will be added to the previous response package to the national security law imposed on Hong Kong last summer, which was rolled out last July, the newspaper reported.

Hong Kong’s government has announced electoral changes requiring office-holders to pledge and maintain an oath of loyalty to Hong Kong and Beijing, a move which hints further on China's domination over the region, media reports said.

Without following the stance, the office holders might face disqualification and a five-year ban on running for re-election.

A bill to “ensure patriots govern Hong Kong” has been endorsed by the executive council and will be tabled in March, the secretary for constitutional and mainland affairs, Erick Tsang, told a press conference on Tuesday, reports The Guardian.

“If you claim to be patriotic and you don’t respect, or you try to sabotage, the basic characteristics of our system – a system led by the [People’s Republic of China] – that would not be acceptable,” Tsang was quoted as saying by the newspaper. “You can’t say: ‘I’m patriotic but I don’t respect that it’s the Chinese Communist party which leads the country’.”

The announcement came a day after a top Beijing official signalled that significant changes would be coming to ensure Hong Kong was run by “patriots” – a clear sign that China intends to no longer tolerate dissenting voices, 23 years after the former British colony was handed over to Chinese rule with a promise it could maintain its own rights and freedoms for 50 years, the newspaper reported.