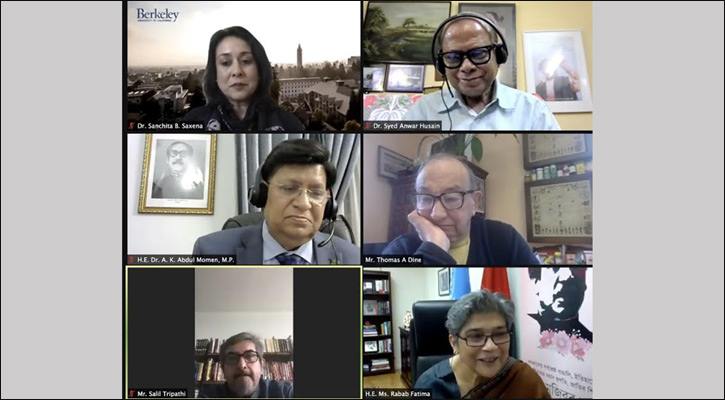 Foreign Minister AK Abdul Momen has said Bangabandhu was ideologically very upright, yet essentially pragmatic to uphold the best interest of his country.

“He, therefore, decided to pursue a neutral foreign policy based on universal values and principles,” he said while speaking at a webinar organized by Bangladesh Permanent Mission to the United Nations, New York in collaboration with the Subir and Malini Chowdhury Center for Bangladesh Studies, University of California, Berkeley.

The Permanent Representative (PR) of Bangladesh to the UN Ambassador Rabab Fatima made the welcome remarks.

In her opening remarks,  Rabab Fatima paid deep homage to the Father of the Nation Bangabandhu Sheikh Mujibur Rahman, whose visions and ideals,as articulated in his maiden speech to the UN General Assembly in 1974, continue to shape the foreign relations of Bangladesh.

“Bangabandhu called for the revival of human unity and brotherhood to change the inequality that prevailed in the economic situation of the world at that period of time – an idea we find even more relevant today, when the COVID-19 pandemic has made fractures in the current international development system strikingly visible,” she added.

Referring to the recent graduation of Bangladesh from LDC status, she thanked Prime Minister Sheikh Hasina for leading the country to prosperity, that Bangabandhu desired to build.

Foreign Minister AK Abdul Momen in his remarks reiterated the historic dictum of Bangabandhu, "friendship towards all, and malice towards none” as the bedrock of Bangladesh foreign policy and will continue to define it in the future.

The Foreign Minister mentioned that Bangabandhu’s Foreign Policy was marked by dynamism coupled with neutrality and high moral standing in the global arena. It earned Bangladesh the recognitions of almost all the countries of the world withina very short span of time.

Salil Tripathi praised Bangabandhu for advocating ‘inclusive nationalism’, which is rooted in the 1952 language movement and opined that such concept remains very relevant in today’s world.

He also invites the international community to learn few principles that Bangabandhu established by example – his dignified treatment to the survivors of sexual violence.

Tom Dine shed lights in the political climate in US administration during the war of liberation in 1971 and lauded Bangladesh for proving the then US leadership wrong through transformative development and progress in 50 years’ time.

As the Bangabandhu Chair of Bangladesh University of Professionals, Professor Anwar Hussainfocused on Bangabandhu’s role in placing Bangladesh in the international stage.

The Foreign Minister and other speakers responded to the questions posed by participants.

The speakers emphasized on conducting more research and campaigns to spread the ideals of Bangabandhu among the young generations.

Salil Tripathi is the author of “The Colonel Who Would Not Repent: The Bangladesh War and its Unquiet Legacy” and an award-winning journalist who chairs PEN International's writers in prison committee.

Tom A Dine, a former US diplomat, received Friends of Bangladesh liberation war honour for his contribution to Bangladesh’s independence.

The event was moderated by Dr. Sanchita B. Saxena. Dr Saxena is the Director of the Subir & Malini Chowdhury Center for Bangladesh Studies and also the Executive Director of the Institute for South Asia Studies of University of California, Berkeley.

The webinar was full to its capacity with the presence of large number of foreign students, academics, diplomats, media personalities and civil society representatives.