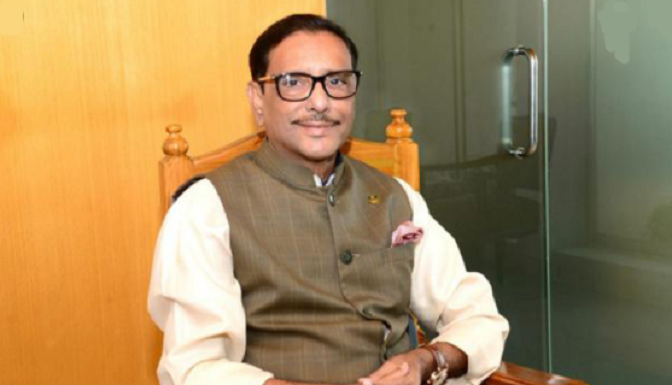 He came up with the remark while speaking at the extended meeting of AL Dhaka North City unit through videoconferencing from his official residence here.

Speaking as the chief guest, Quader, also the road transport and bridges minister, said by voting for boat in the fifth phase of municipality polls, the country’s people have proved that they are in favour of development and achievement of Prime Minister Sheikh Hasina.

Mentioning that different development projects of the country are now visible, he said BNP did not show any success of development and that is why drought has emerged in its politics.

Calling upon the AL Dhaka city leaders to resist all the BNP’s intrigues, Quader said the country’s development advancement being carried out under the courageous and skilled leadership of Prime Minister Sheikh Hasina has been lauded around the world.

But, he said, BNP leaders are now involved in conspiracy to oust the government.

The AL general secretary said there is no issue in the country to wage a movement, which puts the BNP in trouble.

Without finding a proper issue to wage a movement, he said, BNP is trying to hold straws to survive like a sinking person.

He said Bangladesh graduated to the developing country from the least development country (LDC) position under the leadership of Sheikh Hasina, the elder daughter of Bangabandhu.

About the committees of AL Dhaka city units, the AL general secretary said as per the section 35 (1) of the party’s constitution, the committees of all the AL Dhaka south and north units must be formed within next three months by holding conferences.