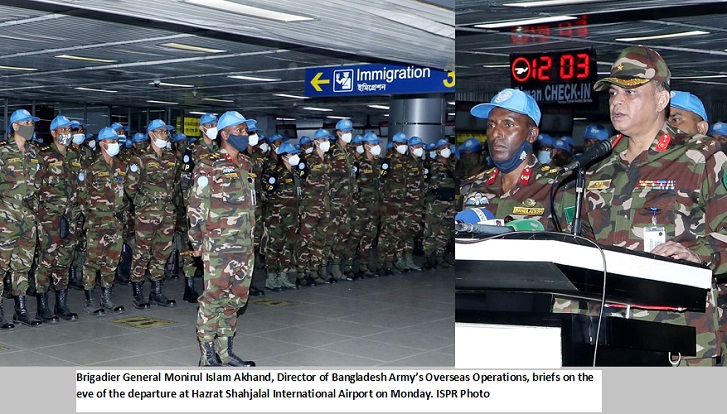 As part of the transition to the United Nations Organization Stabilization Mission in the Democratic Republic of the Congo or MONUSCO, the first contingent of 205 members out of three contingents of the Bangladesh Army left Hazrat Shahjalal International Airport Monday, on the first rotation flight of the peacekeeping mission.

On the occasion, Brigadier General Monirul Islam Akhand, Director of Bangladesh Army’s Overseas Operations, told at the briefing on the eve of the departure at Hazrat Shahjalal International Airport that Bangladesh’s peacekeepers have successfully completed more than 33 years of peacekeeping operations under the auspices of the United Nations.

Bangladesh’s strong contribution to peacekeeping operations is universally appreciated and acknowledged. Since August 31, 2020, Bangladesh has again achieved the status of the top peacekeeper sending country.

The sincerity, tireless efforts, efficient professionalism and great self-sacrifice of the Bangladesh Armed Forces lies behind this glorious achievement.

The rotation activities of Bangladeshi peacekeepers, like other peacekeeping countries, were also temporarily suspended due to the ongoing Covid-19 situation. It was later re-launched under the timely direction of UN Secretary-General António Guterres and the dedicated efforts of Bangladesh Army Chief General Aziz Ahmed.

Previously, the contingents’ foreign missions were operated by various foreign airlines under the auspices of the United Nations.

Under the direction of Prime Minister Sheikh Hasina and the dedicated efforts of the Bangladesh Army Chief, rotation activities are being conducted by Bangladesh Biman and every member going on a foreign mission is being vaccinated with Covid-19 before going on a mission, which has further enhanced the image of Bangladesh in the international arena.