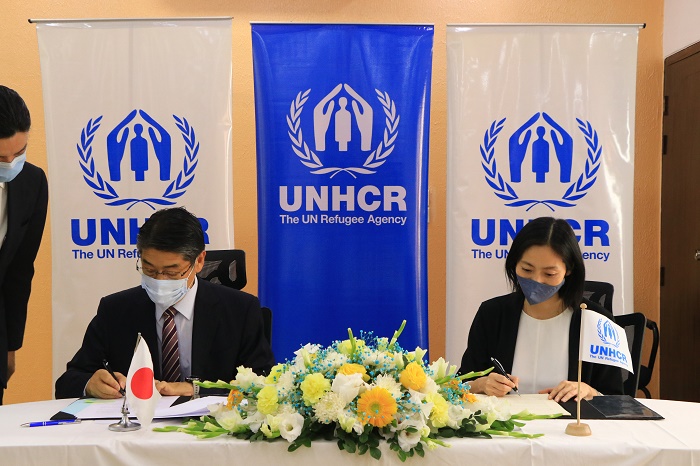 The government will provide US $10 million to support the improvement of water supply and distribution systems for Bangladeshi host communities and Rohingya communities at Teknaf Upazila in Cox’s Bazar district.

An agreement to this effect was signed between Japan and UNHCR, the UN Refugee Agency, in Dhaka on Sunday by Ambassador of Japan to Bangladesh, ITO Naoki and UNHCR Bangladesh Assistant Representative, Ms. KASHIWA Fumiko, said a joint press statement of Japan and UNHCR.

Teknaf Upazila in Cox's Bazar has been facing challenges in ensuring safe access to water for the local population for many years. The situation became even more challenging following the influx of Rohingyas forced to flee from Myanmar in recent years. This contribution will help to stabilise the water supply, and to improve the living conditions of both communities.

The project will be implemented over the course of three years, and carried out in close collaboration and under the guidance and leadership of the Bangladesh Government, including the Economic Relations Division, the Department of Public Health and Engineering, the Ministry of Disaster Management and Relief as well as the Deputy Commissioner in Cox’s Bazar.

“When the refugee influx began in August 2017, local Bangladeshi communities in Teknaf and Ukhiya Upazilas were the first responders, providing shelter, food, and water to those forced to flee.

The Government and the people of Bangladesh continue to generously host this vulnerable population, until durable solutions can be found. UNHCR, with the support of the Government of Japan, is committed to supporting host communities as well as the Rohingya population, who need continued humanitarian assistance” said Ms. Kashiwa, UNHCR Assistant Representative to Bangladesh.

“I commend UNHCR for its successful implementation of assistance to Rohingyarefugees so far, in cooperation with the Government of Bangladesh. Both host community and refugees will benefit from this project,” said Ambassador ITO Naoki.

“I sincerely hope that this project will be able to improve access to water for the host community and refugees in Teknaf, and to contribute to the stable development of Bangladesh. Japan’s humanitarian assistance for these beneficiaries has reached US $140 million and Japan will continue its support to Bangladesh, in the pursuit of Free and Open Indo- Pacific.” The Japanese Ambassador added.

Since the influx of refugees into Bangladesh began in August 2017, the Government of Japan has granted approximately US $140 million to international organizations and NGOs to assist both Rohingya refugees, as well as the host communities. This includes the USD $10 million donated today to UNHCR.