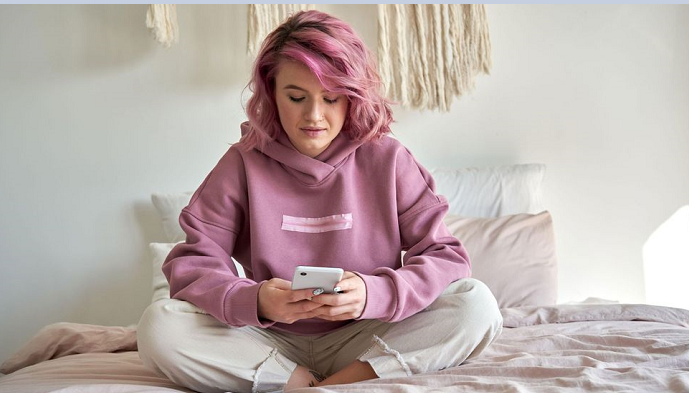 Twenty-three-year-old Londoner Max Selwood has a popular TikTok account, but not the kind you might expect. Unlike the dance trends and cooking how-tos that blew up on the platform in 2020, Selwood’s videos focus on a less fun – but also popular – subject: mental health.

Selwood, who has anxiety, depression and obsessive-compulsive disorder (OCD), posts clips about social anxiety, mood changes, toxic masculinity and more. He first started posting about mental health on Instagram about three years ago, but began posting on TikTok not long before the start of the coronavirus pandemic.

“TikTok has a younger demographic, [and] I want them to be able to see that it's fine to feel [bad], it’s fine to feel great, and if you do have mental health issues, it’s absolutely fine to address them and speak to people about them,” says Selwood. He adds that these posts help him work through his own feelings, too.

Across social media, discussions of mental illness from Generation Zers like Selwood are everywhere; a 2018 Pew Research Center report showed that one-third of 13- to 17-year olds surveyed regularly posted about their feelings on social media. This is especially the case on TikTok, where Gen Z reportedly makes up more than 60% of the platform’s billion-plus users globally.

Though publicly addressing mental health has historically been a taboo, Gen Z is posting away despite the prospect of discrimination or ramifications from broadcasting their struggles. What is it about Gen Z that is driving this boldness and shift – and is there something they’ve figured out that the rest of us haven’t yet? Experts say it has to do with a sea change we’re witnessing around mental illness broadly, but it’s also unique to the generational experiences of young people today.

Putting it out there

For decades, entrenched stigma around mental illness fostered an unwillingness to openly discuss such issues, causing lower diagnosis and treatment rates in older populations for illnesses such as depression and anxiety. A 2019 study in the UK showed that baby boomers were “brushing off” mental health problems. “I think a lot of older generations are probably suffering in silence” because of their unwillingness to confront the stigma, says Lisa Strohschein, president of the Canadian Population Society and a sociology professor at the University of Alberta.

But Gen Z is bucking that trend, and TikTok has become one place where it’s most obvious. Social media is often associated with worsening mental health, so it’s somewhat ironic that young users are relying on these very platforms to subvert expectations around mental health. But TikTok has created a space to discuss mental health in a vulnerable, supportive way; the platform’s format – almost like a video call – fosters intimate connection in a way that other platforms such as Instagram don’t.

Users are racking up millions of views talking through their panic attacks, depression and OCD. One late-2020 TikTok trend had users taking a 15-minute online test rating depression, anxiety and stress, then sharing their results. Therapists on the platform are also gaining traction, and advice-laden “therapy TikTok” is on the rise, too. Although these posts don’t provide the full spectrum of professional help those struggling may need, they do provide an outlet and raise awareness.

While Gen Z are the loudest new voices, some experts note that millennials across the globe helped pave the way to changing attitudes about sharing mental-health struggles. Psychologist B Janet Hibbs, author of The Stressed Years of Their Lives: Helping Your Kid Survive and Thrive During Their College Years, credits millennials with de-stigmatising these discussions. “Millennials were the pioneers in pointing out to the other generations that they had sustained what I would call a systemic betrayal, of ‘work really hard and you'll be fine’,” she says, a trend she also sees manifesting in Gen Z.

It makes sense that Gen Z would pick up the ball from millennials and run with it, as both have been shaped by global crises. Both the 2008 recession and 9/11 greatly impacted millennials experiences, and experts expect Gen Z will be similarly marked by the coronavirus. Hibbs and Strohschein suggest that these crises have lowered the sense of risk in Gen Z, and heightened their interest in de-stigmatising discussion around barriers that hold them back, including mental health.

There is, of course, inherent professional risk around such vocalisation. Research shows that many employees, especially of older generations, withhold disclosure of mental-health struggles; some also express worry about their viability as a job candidate or fear workplace stigmatisation if they’re seen as emotionally unstable or vulnerable.

However, Selwood says he’s not worried about the risks – and research suggests he’s not the only member of Gen Z who agrees.

The support and validation Selwood has received from strangers and family alike has made him less afraid of repercussions, including at work. “If, for instance, my boss sends me, ‘Oh, I’ve just seen your TikTok, for the clients, would you mind not posting about [it]?’ I'd literally be like, ‘No…’ It would be like someone expressing their love for the LGBTQ community and your boss telling you, ‘Can you please not talk about that, because I don’t think it’s appropriate?’ It is appropriate, because it is a fact of life. Everyone has mental health, just like we have physical health,” says Selwood.

But he acknowledges not everyone can operate from that mentality. Selwood works with social-media influencers for his day job, and says he has full support from his colleagues and clients alike for his content. “My colleagues have always been extremely supportive. But I understand that, obviously, in some jobs you need to be careful with what you post,” he says.

So, how careful should workers of all stripes be about these posting trends? It’s a fine line to walk – and one that we may not yet know enough about. Along with not seeming supportive of employees, Kimberly O’Brien, an industrial-organisational psychologist and professor at Central Michigan University, says that any employer that decided to bring up an employee’s social media posts about mental health would be risking a messy legal battle. “Looking at an employee's social media and making a work decision based on what they post falls under employment law,” says O’Brien.

An increase in employer support for psychological wellness programmes may be a positive indicator that expression is increasingly acceptable. “It depends on where you look, but between 60% and 90% of workplaces have some sort of health promotion. And that may include stress reduction of some sort, and stress is just one part of mental health, but it's somewhere that they're moving,” says O’Brien.

Both Hibbs and Strohschein express optimism that changes in how we discuss mental health, pioneered by millennials and taken further by Gen Z, will contribute to greater progress around both mental-health and disability accommodations. They suspect we’re reaching a moment of de-stigmatisation in which employer expectations around mental health are shifting, expedited in part by the coronavirus pandemic’s normalisation of disability accommodations.

Strohschein believes younger workers will keep pushing boundaries around these conversations – especially as the pandemic has so rapidly transformed work. There’s also hope in past precedents, too, such as a move toward workplace acceptance of LGBTQ workers. “It can change super quickly,” says Hibbs. “Things that have been uber-stigmatised can lose their fear and loathing.”
O’Brien says we’re witnessing that change in real time. “It takes a long time [for it to translate], because the decision makers in the workplace are not going to be typically Gen Z and millennials. I wonder if these stereotypes [about young people] are going to make people go, ‘Oh, well, they're just younger, and part of being young is to be dramatic and angsty’. Or if they're going to say, ‘Look, you're a liability.’ But I'm not really seeing any trends on that.”

Instead, O’Brien sees the change in mental-illness acceptance happening across our culture  – even if only Gen Z is taking to TikTok about it. “It’s [part of] the whole zeitgeist right now to be more understanding that mental health is health, your brain is part of your body. And when you say it's all in your head, turns out your head is in your body,” she says. “When Gen Z is posting about it … everyone is being affected by the breaking down of that stigma and that taboo. Somebody who is maybe 40 who is out of work and comes back, they'll also have that same change.”

Selwood is also hopeful that change is happening – and feels social media will be a major catalyst in reaching a new level of acceptance in years to come. In the meantime, though, he’ll keep focusing on his corner of the internet. “At the end of the day, my goal is just to help. If one person sees it, and it helps one person, then I'm happy with that.”