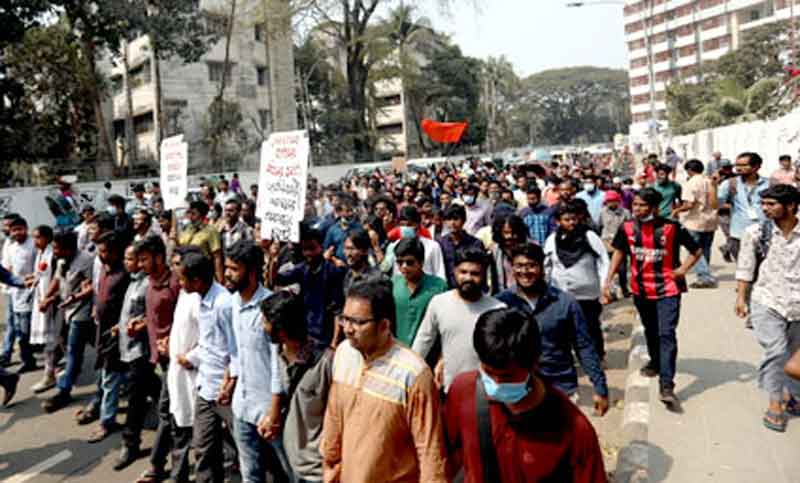 Police on Monday foiled the bid of the leaders and activists of some left-leaning student bodies to besiege the Home Ministry to press home their various demands including abolition of the Digital Security Act.

Their other demands include investigation into the death of writer Mushtaq Ahmed in jail, release of their eight leaders and activists and withdrawal of cases filed against them.

Leaders and activists of the student bodies, including Bangladesh Chhatra Front, Chhatra Federation, started their march towards the Home Ministry around 12 pm from Raju Sculpture.

When they reached near the secretariat police obstructed them.

A scuffle took place between police and the protesters when they tried to march forward crossing the police barricade.

Then the protesters took position there and started sit-in.

They also staged demonstrations on the Dhaka University campus protesting the death of writer Mushtaq Ahmed under police custody on Friday and Saturday.

On Friday evening, at least 35 of protesters and police were injured in a clash between police and activists of the left-leaning organisations who gathered in Dhaka University area to stage protests.

According to sources at Shahbagh Police Station, four protesters were arrested from the spot, but the protesters claimed that the number is seven.

Police on Saturday filed a case against seven people who were arrested from Shahbagh on Friday for obstructing police in performing their duties.