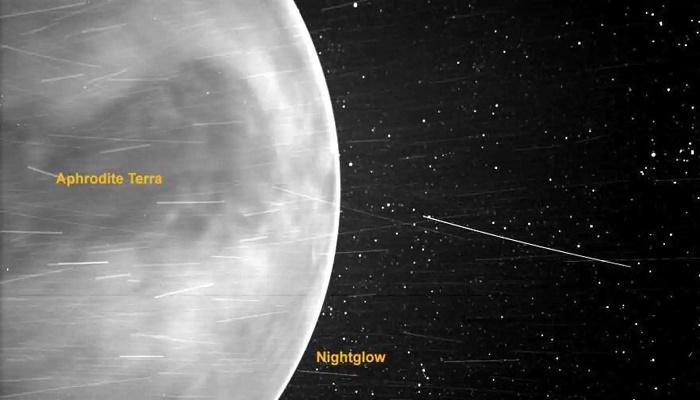 The picture shared by Nasa of the onboard Wide-field Imager inside the Parker Solar Probe (WISPR) was originally clicked in July 2020. The image shows how Venus’ surface looked during nighttime. WISPR also captured the planet’s largest highland region known as the Aphrodite Terra.

The Parker Solar probe’s WISPR uses the gravity of the planet Venus to understand the dynamics of solar winds, take images of the solar corona and study the heliosphere. The heliosphere is the bubble which goes beyond the orbits of the planets and is created by solar winds. It moves with the Sun through interstellar space and is shaped like a long wind sock.

WISPR uses the gravity of Venus to bend its orbit as the planet’s gravity assists Parker Solar Probe to fly very closely to the Sun. Parker Solar Probe, which has been described by Nasa as ‘Humanity’s First Visit to a Star’ aims to fly through the Sun’s atmosphere as close as 3.8 million miles to the surface of our closest star. For that the spacecraft will complete seven flybys over nearly seven years around the planet Venus.

Upon receiving clear pictures of the Venusian surface, Angelos Vourlidas, the WISPR project scientist from Johns Hopkins Applied Physics Laboratory (APL) in Maryland who closely worked with the WISPR campaign, in a statement released by the space agency said, “That aspect of the image took the team by surprise. WISPR is tailored and tested for visible light observations. We expected to see clouds, but the camera peered right through to the surface.”

Brian Wood, who is an astrophysicist and WISPR team member from the US Naval Research Laboratory in Washington said the images were similar to Japan’s Venus-orbiting Akatsuki mission. He said, “WISPR effectively captured the thermal emission of the Venusian surface. It’s very similar to images acquired by the Akatsuki spacecraft at near-infrared wavelengths.”

NASA in their statement also said that more fascinating pictures shall be seen later this year as WISPR completed another flyby of the planet last week. “For more insight into the July 2020 images, the WISPR team planned a set of similar observations of the Venusian nightside during Parker Solar Probe’s latest Venus flyby on Feb. 20, 2021. Mission team scientists expect to receive and process that data for analysis by the end of April,” the statement said.