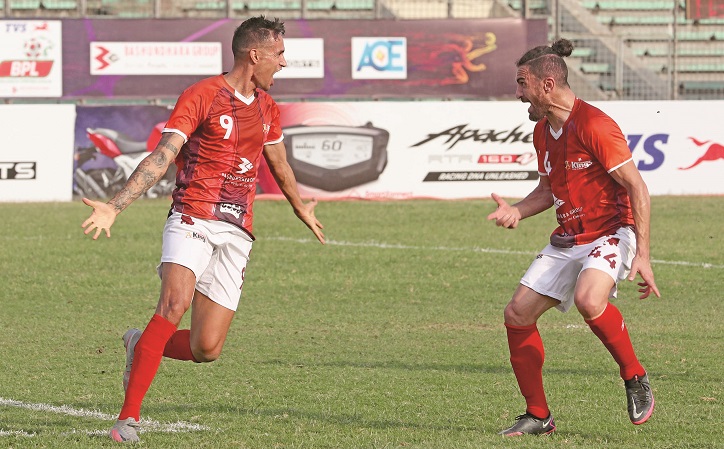 Kings started to dominate Dhaka Abahani from the very beginning of the game. In the 18th minute, Raul sent the ball home correctly from a goalmouth melee in the second attempt while a left-footer from Brazilian forward Robson Azevedo da Silva Robinho rebounded hitting a side post (1-0). After seven minutes, Iranian defender Khaled doubled the margin 2-0, off a corner from Robson Robinho in the 25th minute.

After half-time, Abahani got another blow Brazilian midfielder Jonathan scored the third goal for Kings with a right-footer close-range shot utilising a short pass from Raul in the 51st minute (3-0). After the half-time, Raul sealed the fate of the match scoring his second with an eye-catching header, off a cross from Jonathan in the 76th minute (4-0). With the day’s feat, the Argentine scored a total of 9 goals including a hat-trick in the ongoing league.

After conceding 4 goals, Abahani got a chance to reduce the margin as Kings forward Rimon Hossain fouled Abahani’s Haitian forward Kervens Belfort inside the box in the 80th minute. Referee Bitu Raj Barua awarded Abahani with a penalty and Belfort made no mistake to convert the spot-kick correctly in the 81st minute (4-1).

After the day’s massive victory, Kings Spaniard coach Oscar Bruzon said that they were in good advantage in the first leg and now eyeing the second leg.

“We always want results here in Bangladesh. We are in good advantage, now we have left seven games in Cumilla in the second leg. We have to try to capitalise on home advantage in the second leg. I think all of my players make the difference. This is not the celebration time, this is just the first leg,” he added. 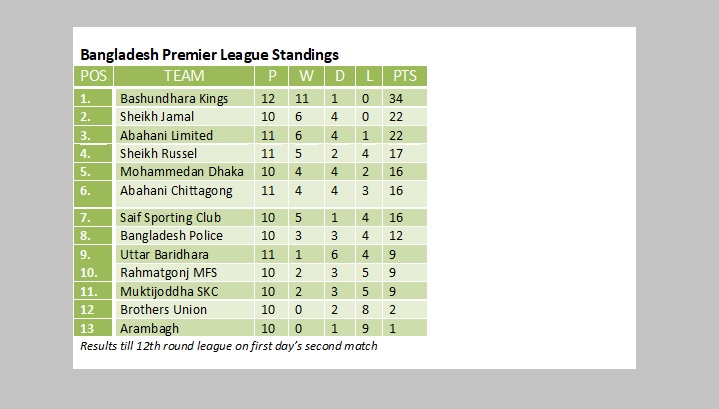 Dhaka Abahani Portuguese coach Mario Lemos said that his side were not well prepared for this big match.

“Unfortunately our two key players – Ziban and Rayhan -- were not in the team. And also Belfort was not a full fit. I take full responsibility for this result. It was my fault, I haven't prepared my team properly, and I haven't done a good job to motivate my players. Bashundhara are the best team and they killed us in the match. We need to improve more and more,” he added.

In their last four meets in the domestic leagues, Kings won three games while Abahani one. In their last meet, Kings beat Dhaka Abahani by 3-1 goals in the thrilling second semifinal of Federation Cup in January. Kings also beat Abahani by 1-0 goal and 3-0 goals in the BPL 2018-19, but conceded a 1-3 goals defeat in Fed Cup final in 2018.