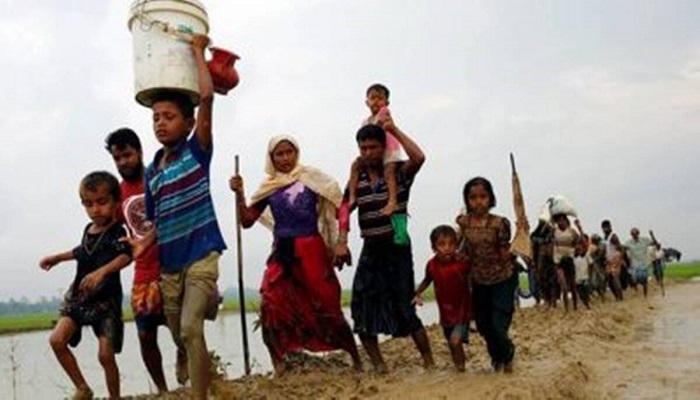 India raised the issue of Rohingya repatriation from Bangladesh to Myanmar at the United Nations (UN) platform.

It has emphasised the need for an early return of Rohingya displaced persons from Bangladesh to Myanmar, saying it has the greatest interest in resolving the problems.

To UN, India said  it is the only nation that shares a long border with both countries. Speaking at the informal meeting of the UN General Assembly late Saturday about the situation in Myanmar after the armed forces staged a coup this month, India's Permanent Representative to the UN Ambassador TS Tirumurti said India must make that recent events in the country do not impede the progress achieved so far and the international community should encourage and support positive measures.

Tirumurti addressing the issue of displaced people from Myanmar's Rakhine state said that India has the greatest interest in solving the problem of repatriation of displaced people as it is the only country that shares a long border with Bangladesh and Myanmar.

"We continue to advise our partners on the need for a balanced and constructive approach to this issue. To this end, mobilising support for the development needs of the local population is essential. India has been constantly encouraging stakeholders to find practical and pragmatic solution."

Underlining that a" collaborative and consensus based approach" is key to reaching a meaningful and practical outcome, Tirumurti said the international community must work to address the challenges that stakeholders continue to face in resolving humanitarian issue in a timely way.

He said "India will continue to work with Governments of Bangladesh and Myanmar to enable the earlier return of displaced persons to their homes in Rakhine state in a safe, rapid and sustainable manner."

Praising Bangladesh for hosting more than a million displaced people on its territory, India said it is important for the international community to recognise and understand the humanitarian burden that Bangladesh continues to face and the efforts it has made to ensure the well-being of the people displaced.

Referring to recent army takeover, Tirumurti  said New Delhi is deeply concerned that the gains made by  Myanmar  over the last decades on the path towards democracy should not get undermined.

As a "close friend and neighbour" of Myanmar and its people, the envoy said, India will continue to closely monitor the situation and will remain in discussion with like-minded countries so that the "hopes and aspirations of the people are respected".

"We believe that the rule of law and democratic process must be upheld, those detained be released and that calm prevails. We call on the Myanmar leadership to work together to resolve their differences in a peaceful and constructive manner," he said.

Restoring democratic order should be the priority of all stakeholders in Myanmar and international community must lend its constructive support to the people of Myanmar at this critical juncture, he added.