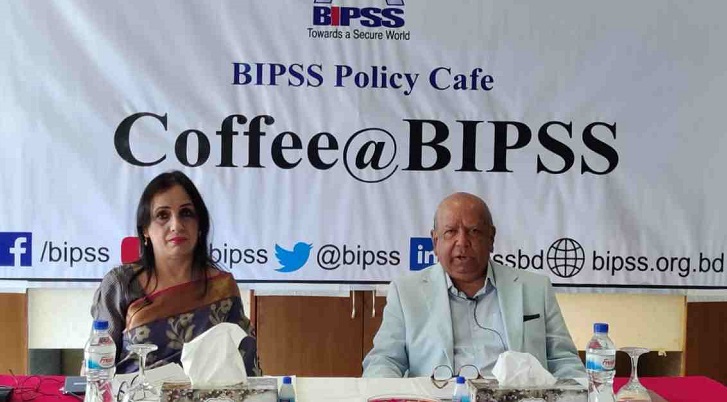 President of Bangladesh Institute of Peace and Security (BIPSS) Maj Gen (retd) ANM Muniruzzaman on Sunday talked about the risks Bangladesh faces as a frontline state in the face of “climate change-induced insecurity”, noting that this will become a regional security issue impacting international security.

According to estimates, Muniruzzaman, also Chairman of the Global Military Advisory Council on Climate Change (GMACC), said sea-level rise will likely inundate 20 percent of Bangladesh landmass and trigger a climate refugee population of 25 to 30 million people.

BIPSS hosted their Policy Café called ‘[email protected]’ at a city hotel with the theme ‘Inundated and Unstable: Understanding the Security Implications of Climate Change.’

The event was attended by many dignitaries, including diplomats, climate change experts, scholars, journalists and youth activists.

Muniruzzaman began his address by emphasising the serious and existential security threat climate change poses to all nations. “The major impacts will be on the nexus of food, water and energy security,” he added.

Muniruzzaman also said that the most destabilising effect of climate change would be the mass human displacement and migration that would occur and trigger a huge climate refugee population.

“This is especially true for low-lying states and island states. Rising sea-levels will cause a major security threat to nations,” he said.

Muniruzzaman also highlighted that climate-induced events like extreme weather and disasters are a cause of concern as they can destroy property and take many lives.

Ayesha Kabir echoed the sentiments of Muniruzzaman and asked the chairman some very inquisitive questions.

“How do assess Bangladesh’s climate change vulnerability?” she asked. Muniruzzaman replied, “All impacts of climate change can be felt in Bangladesh already. We’re at a Ground Zero Climate Security Scenario.”

She further asked if Bangladesh could leverage its position to help solve the crisis. General Muniruzzaman replied optimistically and said it was definitely possible.

He gave an example of BIPSS Research Fellow Shafqat Munir where he engaged in dialogue with special US Presidential Envoy on Climate John Kerry at the special edition of the Munich Security Conference very recently.

Munir highlighted the importance of the impacts of climate change and the effects of sea-level rise in Bangladesh. In his reply, special envoy Kerry acknowledged the nation’s climate vulnerability and invited Bangladesh to attend the US hosted climate summit in Washington D.C. to voice their concerns directly.

Kabir also suggested other necessary initiatives like legislative actions and outreaching campaigns to make people more aware about the effects of climate change among many others.

Participants and dignitaries engaged in dialogue and a number of key issues were raised such as the accountability of major polluters, vulnerability of low-lying island states and the role of public and private partnerships.

The participants also expressed concerns regarding whether the threat from climate change has increased due to the current state of globalisation.

They enquired if the international community is prepared to come with sustainable policies to confront climate change-related security issues.

They emphasised whether alternative solutions were viable or were mitigation the only answer. What should be the adequate course of action from a security angle?

BIPSS, which has been working for over a decade on climate security and has consistently published on the subject, thinks climate change needs urgent action and they will continue to work on the issue and host such productive discussions, more diligently now than ever.