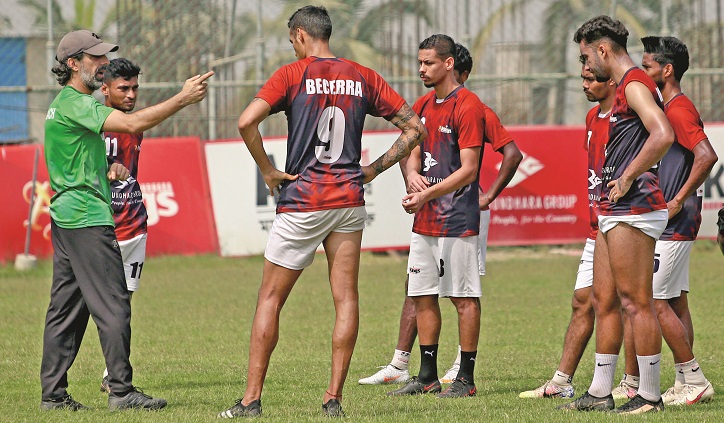 Defending champions Bashundhara Kings and runners-up Dhaka Abahani Limited will lock horns with each other in a high-voltage match of the ongoing Bangladesh Premier League football match at the Bangabandhu National Stadium in the capital at 4:00pm on Sunday.

Holders maintained an unbeaten run to 11 matches in the league and consolidated the top spot with 31 points from 10 wins and a draw. The star-studded club scored 28 goals and conceded only 4. Kings’ Brazilian forward Robson Azevedo Da Silva Robinho currently leading the top scorers list in netting 12 goals including a hat-trick.

The invincible Kings also maintained their unbeaten battle to 16 matches, including five games of Federation Cup and in the ongoing domestic season. Among these, the country’s top outfit won 15 and drew one.

On the other hand, Dhaka Abahani Ltd shared the second position with Sheikh Jamal Dhanmondi Club Ltd with 22 points from 6 wins and 4 draws each. Both Abahani and Sheikh Jamal maintained their unbeaten run to 10 matches in the league.

“Abahani are the toughest opponents, but we are also ready to beat them. We will play to win the game. We are now league leaders, so there is no other way except the ultimate victory. We will be able to extend the point difference. It will be an important match for us. We are all serious about the game,” Tawhidul said.

Kings are likely to play their previous eleven in the game. Two defenders Topu Barman and Sushanto Tripura, who were injured, will miss the game today.

Kings technical director BA Jobayer Nipu informed about their preparations ahead of the game that they were fully prepared and there were no new injuries in the team.

“We are ready to play against Abahani, there are no new injuries in the team. We have no pressure because we are leading the point table with good points difference. We will try hard to win the game. There will be no pressure if we play a draw. The pressure is on Dhaka Abahani, they have to win in the match,” Nipu said.

Dhaka Abahani Portuguese coach Mario Lemos that they would try to reduce the points difference by beating Kings.

“Definitely it’s a big match, we are 9 points behind Kings. We have to win the match. We have a couple of injuries, but the rest of the team members are ok,” Lemos said.

In their last four meets in the domestic leagues, Kings won three games while Abahani one. In their last meet, Kings beat Dhaka Abahani by 3-1 goals in the thrilling second semifinal of Federation Cup in January.