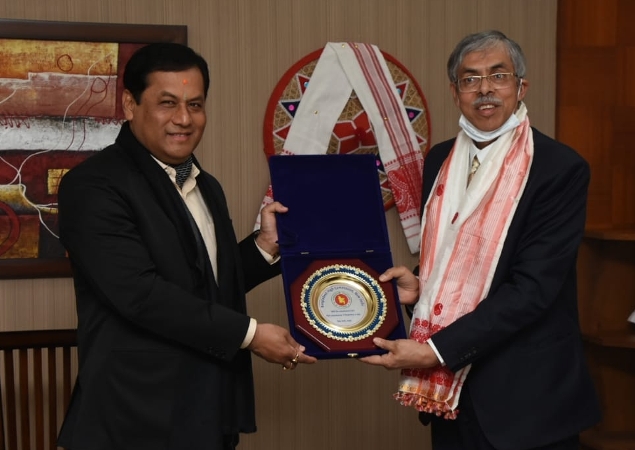 Bangladesh High Commissioner to India Mohammad Imran is visiting the Indian states of Assam and Meghalaya to visit places of bilateral importance.

Following this, the High Commissioner paid a courtesy call on the Chief Minister of Assam, Sarbananda Sonwal at his residence on Saturday morning, said a press release of the Bangladesh High Commission.

During the talks, the High Commissioner emphasised on enhancing cooperation on various issues of mutual interest.

Informing about the economic condition of Bangladesh, the High Commissioner said, "Bangladesh has now come a long way in terms of development and is in a very strong position economically."

The Bangladesh High Commissioner emphasised on introducing the people of Assam to the current development picture of Bangladesh and establishing close communication between the people of the two regions through mutual cultural exchange and youth exchange programs.

Chief Minister Sonwal emphasised on regular meetings and contacts between the trade representatives of the two countries and those directly involved in import and export to enhance bilateral trade and resolve trade complexities.

He also visited the massacre site along the Bangladesh-India border and paid homage to the heroic martyrs of the great war of independence.

At that time, he said, Bangladesh has come a long way under the leadership of Prime Minister Sheikh Hasina to realize the dream of Father of the Nation Bangabandhu Sheikh Mujibur Rahman to establish Sonar Bangla and the image of Bangladesh abroad has been greatly brightened.

He added that the governments of the two countries are working with the northeastern states of neighboring India, including Assam, for the development and growth of Bangladesh's trade and tourism industry.

To this end, our missions in India are fulfilling their responsibilities sincerely.

He assured the business representatives of full cooperation in resolving various issues arising out of trade with India.

On the same day, the High Commissioner visited the Dauki Customs Port Immigration Center in Meghalaya and attended an exchange of views with local Indian business representatives. Besides, he visited the new customs port area proposed by India in the border area of ​​Gowainghat upazila of Sylhet.

Besides, the High Commissioner also met the Speaker and Deputy Speaker of the Provincial Assembly of Meghalaya.