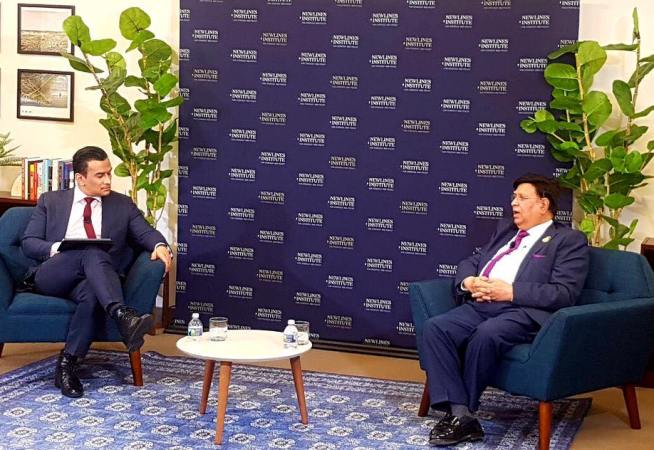 Foreign Minister Dr AK Momen has requested the new US Administration to play a leading role, both bilaterally and multilaterally, to bring about a durable solution of the Rohingya crisis, during his interaction with the US Think Tank ‘Newlines Institute on Strategy and Policy’ on Friday.

Director of the Institute Dr Azeem Ibrahim moderated the event.

During the discussion Dr Momen reiterated that the only durable solution is the repatriation for the persecuted 1.1 million Rohingyas temporarily sheltered in Bangladesh.

Among others, dignitaries, including former US Ambassador to the United Nations, Commissioner from the US Congress on Religious Freedom, and prominent journalists, Members of Congress, State Department officials, UN personnel, and senior leadership of the OIC attended the event, both physically and online. The event was live-streamed on YouTube.

During the Q&A session with the audience, Momen briefed on how Bangladesh Government is working for the welfare of Rohingyas during COVID-19 pandemic, as a result of which there was not a single case of death due to COVID-19 in the Rohingya camps.

He also explained the context and rationale of relocating some of the Rohingya population from the overcrowded Kutupalong camps to Bhashanchar.

He hoped that the Biden Administration would put more political and economic sanctions on Myanmar to create a conducive environment for safe and dignified return of the Rohingyas to their homeland Myanmar.

He noted that Bangladesh Government looks forward to the US Government’s concrete steps and leading role, including his proposal to appoint a Special Envoy on Rohingya, in achieving a sustainable solution of this Rohingya crisis, and hoped to work closely with the US administration in this regard.

The session was moderated by Ambassador Isobel Coleman. There Dr. Momen highlighted the socio-economic development of Bangladesh, tackling of COVID-19 pandemic and efficient management of the ongoing vaccination program in Bangladesh under the judicious direction of Prime Minister Sheikh Hasina.

Referring to his recent discussion with the US Secretary of State, he expressed satisfaction on the existing bilateral partnership between the two countries and hoped to enhance it further towards a strategic level.

On the same day, Bangladesh Foreign Minister virtually met US Congresswoman Jan Schakowsky from Illinois, who appreciated Bangladesh for sheltering a huge number of Rohingyas.

Momen thanked the US Government for its humanitarian and political support to Bangladesh to cope with the Rohingya exodus.

He also requested for US lawmaker’s support to influence US Government   for taking more effective measures like imposing economic sanction and withdrawing GSP facilities of Myanmar. Both sides agreed to have deeper and wider engagement in the coming days ahead.

He is currently visiting Washington DC on an official trip to reach out the new Administration to further enhance the bilateral relations and to convey Bangladesh’s willingness to work closely with the new US Administration.