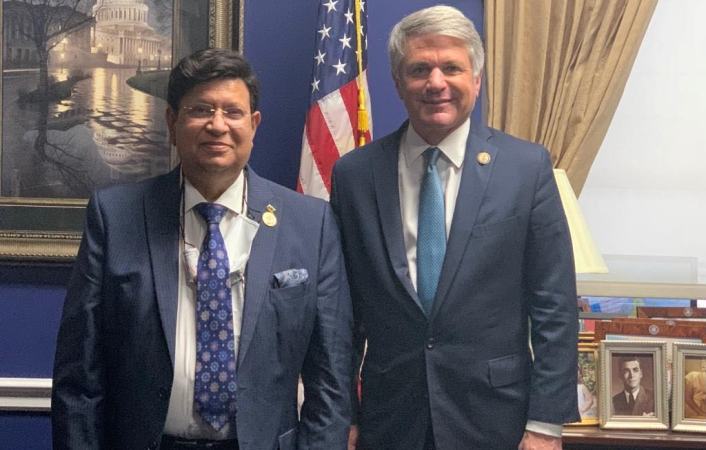 Foreign Minister AK Abdul Momen has expressed Bangladesh’s desire to work closely with the Biden Administration on climate, trade and investment, and security.

He called upon the US Government, both in order to help US consumers and also to assist millions of female workers in Bangladesh’s RMG sector, to put a three-year moratorium on the tariff on imports from Bangladesh.

Momen is currently visiting Washington DC on an official trip to reach out the new Administration to further enhance the bilateral relations and to convey Bangladesh’s willingness to work closely with the new US Administration.

Meeting with US Chamber of Commerce

The US Chamber of Commerce organized a virtual discussion with Foreign Minister Dr Momen titled as “Strengthening Bangladesh-US Trade and Economic Cooperation”.

Ms. Nisha Biswal, Senior Vice President (South Asia) of US Chamber of Commerce and former Assistant Secretary of State opened the engagement highlighting how Bangladesh has set a path towards strong economic growth and thus the interest from American corporates engagement with Bangladesh is growing.

The discussion, also featuring Bangladesh Ambassador to the US Shahidul Islam and US Department of State Deputy Assistant Secretary Laura Stone, focused on Bangladesh’s role as an evolving trade partner both globally and regionally as well as on how to engage with the American business community to increase US-Bangladesh bilateral economic activities.

Corporate leaders from different sectors including such as, energy, banking, insurance, digital economy, financial services, healthcare, aerospace, defense and others actively participated in the discussion.

Momen highlighted the leadership of the Prime Minister Sheikh Hasina for her vision for economic growth and transforming Bangladesh into a developed country by 2041.

Momen expressed his support for the launch of the US-Bangladesh Business Council, and highlighted the partnership opportunities in Bangladesh, opening of the digital economy space, success of the digital payments, importance of media and entertainment, energy transition and future of Bangladesh and its role as a partner in the Indo-Pacific with US companies and partners.

During his meeting with Presidential Envoy on Climate John Kerry, they both discussed the global issue of climate change, and the possible US-Bangladesh collaboration in this connection.

Foreign Minister Momen recollected the vital contribution of Mr. Kerry towards Paris Agreement on Climate Change and welcomed the decision of the US to return to the Paris Agreement.

He described various all the actions taken by the Government of Bangladesh under the prudent leadership of Prime Minister Sheikh Hasina on mitigation, adaptation and resilience. He also briefed John Kerry on all the current and future activities actions of the Climate Vulnerable Forum(CVF) and the Global Centre on Adaptation (GCA) regional office  in Dhaka. Mr. Kerry recognized the extraordinary challenges faced by Bangladesh due to climate change and frequent natural disasters.

Agreeing that the international financial institutions could do more for the issue of climate change, he also opined that displacement due to climate change would be a vital security issue for everybody.

They agreed to work closely in the COP26 and other multilateral platforms in order to fulfil commitments under the Paris climate agreement and even go beyond Paris.

Meeting with US lawmakers

During his fruitful discussions with three US lawmakers, Bangladesh Foreign Minister conversed on potentials of further accelerating political and economic ties between Bangladesh and the US. Bangladesh wants to upgrade her relations with the U.S. from partnership to a strategic level by sharing common goals and working closely with US new administration, he added.

Foreign Minister informed US lawmakers about the trajectory of economic growth and socio-economic development of Bangladesh and briefed how Bangladesh Government has tackled the COVID-19 pandemic and managed the ongoing vaccination program effectively with the able guidance and direction of Prime Minister Sheikh Hasina.

He noted with satisfaction the excellent bilateral cooperation between the two countries in tackling COVID 19 in the initial phase of the pandemic, through the US donation of high-quality ventilators and Bangladesh’s supply of 6.5 million PPEs.

US lawmakers appreciated Bangladesh for sheltering over one million Rohingyas and expressed concern on the tremendous pressure it has created on the Government and the people of Bangladesh.

Foreign Minister Momen urged for US lawmakers’ intervention to put enough political pressure on Myanmar to create conducive environment for sustainable return of the Rohingyas.

On trade and investment matter, the Foreign Minister welcomed US investment in Special Economic zones and High-Tech Parks, highlighting the higher return of investment from Bangladesh by utilizing two major resources efficiently and effectively, namely, young and hardworking manpower and plenty of water.

He added the geo-political importance as well as the good connectivity of Bangladesh in South Asia region, which could serve as a launching pad for US companies to get access to the wider regional market.

Bangladesh Foreign Minister, referring to the celebration of birth centenary of the Father of the Nation Bangabandhu Sheikh Mujibur Rahman and the Golden Jubilee of the Independence of Bangladesh, invited US lawmakers to visit Bangladesh to see the remarkable socio-economic progress achieved under the visionary leadership of Prime Minister Sheikh Hasina, and also the situation of the displaced Rohingyas.

The Minister urged the Secretary General to ensure Bangladesh’s higher-level representation at the UN Peacekeeping mechanism.

Foreign Minister Momen is currently visiting Washington DC on an official trip to reach out the new Administration to further enhance the bilateral relations and to convey Bangladesh’s willingness to work closely with the new US Administration.