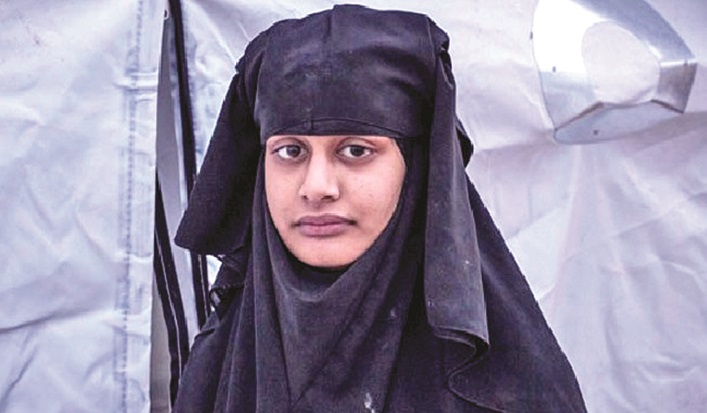 Shamima Begum, who fled Britain as a schoolgirl to join Islamic State in Syria, has failed to restore her British citizenship after the Supreme Court ruled she had lost her case.

The judgment on Friday from the UK’s highest court is a critical – and controversial – test case of the UK’s policy to strip the citizenship of Britons who went to join Isis and are being detained by Syrian Kurdish groups without trial, reports the Guardian.

Lord Reed, the president of the court, said its judges had decided unanimously to rule in favour of the home secretary and against Shamima Begum on all counts before it. That means the 21-year-old will not be able to re-enter the UK to fight her case in person and will not be able to have her citizenship restored while she is being detained in Syria.

But the court did hold out the slender hope that Shamima Begum could have a final appeal against the decision to revoke her citizenship if she were ever to be in a position where she could properly instruct lawyers. However, her detention in a Syrian camp, where she is not able to communicate with her legal team, makes that unlikely.

Shamima Begum was 15 when she fled east London with two other school friends to join Isis in Syria six years ago. Although born and raised in the UK, Shamima’s British citizenship was removed in 2019 by the then home secretary, Sajid Javid, shortly after she had been found by a journalist in a prison camp.

The then Conservative minister argued she was eligible for Bangladeshi citizenship, the birth country of her parents.

Priti Patel, the current home secretary, said ministerial authority had been affirmed by the court. “The government will always take the strongest possible action to protect our national security and our priority remains maintaining the safety and security of our citizens,” she added.

Maya Foa, the director of Reprieve, said barring Shamima Begum allowed the UK to avoid responsibility. She said: “Like many of its European counterparts, the UK is more than capable of bringing home British detainees in Syria, many of whom left as teenagers after being trafficked or groomed online. The government should bring the British families back to the UK so that children can be provided with support they need, and adults can be prosecuted where there are charges to answer.”

Shamima Begum wanted to be allowed to return to the UK to pursue her legal challenge in person in a test case about the status of Britons who joined Isis and also had their citizenship revoked.

A two-day hearing in the case in November heard that Shamima Begum was still considered by MI5 as a national security risk because although she had travelled out as a minor, she had “aligned” with the terror group.

Lord Pannick QC, representing Shamima Begum, said she was unable to put her side of the case properly from al-Roj detention camp where she was being held. He told the court she would be at risk of physical harm if she spoke by mobile phone to her British lawyers.

Last July, the court of appeal unexpectedly ruled that Shamima Begum, who is being held by Syrian Kurds, could return home to challenge the British government – prompting the Home Office to appeal to the Supreme Court.

In a 47-page ruling, the Supreme Court said the court of appeal had been wrong to conclude that Shamima Begum should be allowed to enter the UK and fight her case in person by substituting its own reasoning in place of the home secretary.

“It made its own assessment of the requirements of national security, and preferred it to that of the home secretary, despite the absence of any relevant evidence before it,” the judgment said. “Its approach did not give the home secretary’s assessment the respect which it should have received, given that it is the home secretary who has been charged by parliament with responsibility for making such assessments.”

Britain’s highest court also concluded that the court of appeal had mistakenly believed that “when an individual’s right to have a fair hearing of an appeal came into conflict with the requirements of national security, her right to a fair hearing must prevail”.

But it held out one remaining hope for Shamima Begum, concluding that the only fair response was for any final appeal against the decision to revoke her British citizenship to be held over until “Shamima Begum is in a position to play an effective part in it without the safety of the public being compromised”. However, given her detention, it was unclear when that would be the case.

“That is not a perfect solution, as it is not known how long it may be before that is possible,” the judgment said.

Javid, who is no longer a minister, welcomed the ruling on Friday. He said: “There are no simple solutions, but any restriction of rights and freedoms faced by this individual are a direct consequence of the extreme actions that she and others have taken.”

As a teenager, Shamima Begum was married to an Isis fighter while she was embroiled in the Syrian conflict and had three children, all of whom have since died. As Isis was defeated, she was captured by the Syrian Kurds in 2019 and has been in their detention ever since at camps whose condition has been described as “dire”.

Intelligence agencies estimate that 900 Britons travelled to Syria or Iraq to join Isis. Of these about 20% were killed and 40% returned home. The remainder are either missing or held in Kurdish camps, their UK citizenship often having been removed.

Rosie Brighouse, a lawyer with the human rights group Liberty, said ministers had chosen to target Shamima Begum despite allowing hundreds of others to return from Syria. “This approach does not serve justice. It’s a cynical distraction from a failed counter-terror strategy and another example of this government’s disregard for access to justice and the rule of law.”