How did India manage to build an advanced fighter jet like the Tejas? 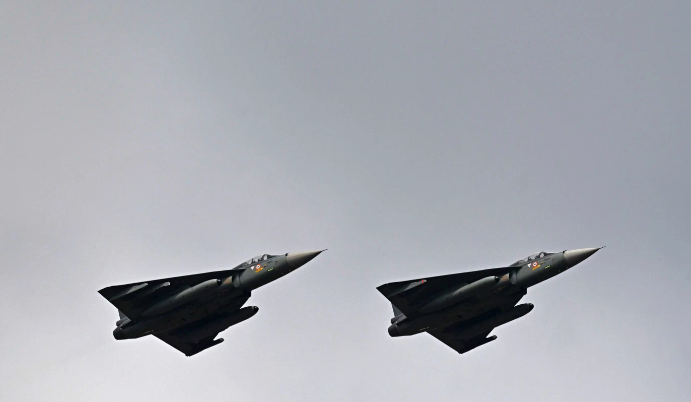 India’s biennial military aircraft show, Aero India, went off without a hitch in early February in the southern Indian tech capital of Bengaluru. Despite the travails of pandemic-era traveling, the United States sent a deputy undersecretary, a Navy admiral, and three Air Force generals. It also sent a nuclear-capable B-1B bomber.

But the real star of the show was what escorted the U.S. aircraft in the sky: an Indian-built Tejas fighter jet. With a name that means “radiant” in the ancient Sanskrit language, the Tejas is the first supersonic multirole fighter aircraft designed and built entirely in India.

How has a relatively poor country like India that is more famous for call centers than for precision manufacturing managed such a dramatic technological leap? In a word: cooperation. India is keen to build defense-industry partnerships with more advanced countries, and—even more importantly—advanced countries are keen to partner with India.

Not only does it have one of the world’s largest military procurement budgets and a large pool of talented engineers, but India also has a strong tradition of rule of law that protects intellectual property and ensures the enforceability of contracts—in stark contrast to China, which is fast losing access to many advanced Western technologies. That makes India a better partner for international technology companies that it, for now, still depends on.

With the Tejas, India joins an elite group of countries that have demonstrated the capacity to develop and manufacture so-called fourth-generation fighters: combat aircraft characterized by electronic fly-by-wire control systems, onboard situation awareness displays, and over-the-horizon strike capabilities.

The United States led the way in the late 1970s with the dual-engine F-15 and single-engine F-16, while China began producing similar fourth-generation fighters only in the early 2000s. With the F-22 and F-35, the United States has since begun to produce fifth-generation fighters—adding stealth capacity among other advances—while other countries, including India, are eager to catch up.

The Tejas is a flagship project of the government’s Atmanirbhar Bharat or Self-Reliant India program. So far, India’s defense industry isn’t nearly as self-reliant as the government might like it to be, and the Tejas—assembled by India’s state-owned Hindustan Aeronautics in Bengaluru—is a good example: The government estimates that the fighter is just 60 percent Indian by value, though that figure is expected to rise over time. The biggest-ticket foreign components are the plane’s General Electric F404 jet engine and Israel Aerospace Industries’ radar and electronic warfare systems. Take away these key components, and all you have is an empty airframe.

For India, that’s not a problem: As a democratic country that honors contracts and respects intellectual property law, it is able to buy advanced technology that it cannot produce itself. That gives the country a major advantage over its regional rivals, China and Pakistan, which simply are not trusted by their suppliers. China’s jet fighter development programs have been repeatedly held back by Russia’s unwillingness to supply high-performance engines for fear of Chinese reverse-engineering. And key components of Pakistan’s locally manufactured JF-17 are entirely sourced from China, as is the design.

India, in contrast to both China and Pakistan, was spoiled for its ability to choose where it received advanced components for its Tejas fighter. When it ran into trouble developing its own homegrown Kaveri engine for the plane, it received offers of assistance from Russian, French, and British firms, in addition to the United States’ General Electric. It was the same with avionics: French and Swedish suppliers were miffed that they lost the contracts for radar and electronic warfare equipment to Israel. Everyone seems to want in on the Indian market, and that gives India enormous leverage over suppliers to acquire the best equipment in the world—at the best prices.

And under the best terms for technology transfer too. These days, no one is keen to help China continue its climb up the military technology ladder. But the United States, Russia, Israel, and multiple European Union countries are falling over themselves to establish local production partnerships for armaments in India. France, having lost out on the Tejas engine and avionics contracts, has agreed to establish local production lines for the Panther helicopters and Rafale jet fighters that it is supplying to the Indian Armed Forces. US aerospace majors Boeing and Lockheed Martin also have joint production agreements with Indian partners.

India is not a Western ally—and indeed, its largest arms supplier has historically been Russia. In addition to reaching out to Western defense contractors, India has also requested joint ventures with Russian partners, though with limited success. Russia prefers to sell complete weapons systems, such as the S-400 anti-aircraft missiles that have caused so much tension in U.S.-Indian relations. Russia is itself a low-cost supplier, so it sees little benefit in establishing an offshore production base in India. Western sanctions also make it difficult for Russia to work with India on anything but a cash-and-carry basis.

India’s blossoming military technology relationships with Western countries and companies go much deeper than mere acquisitions. Under the Self-Reliant India program, India is leveraging its buying power into production partnerships. Just as the East Asian tiger economies once used local content targets to strategically claw their way up technology value chains, India is pushing its defense suppliers first to move assembly to India and then to build local subcontracting networks for components. The fact that defense procurement is specifically excluded from World Trade Organization rules makes this easier for military hardware than for other manufactured goods.