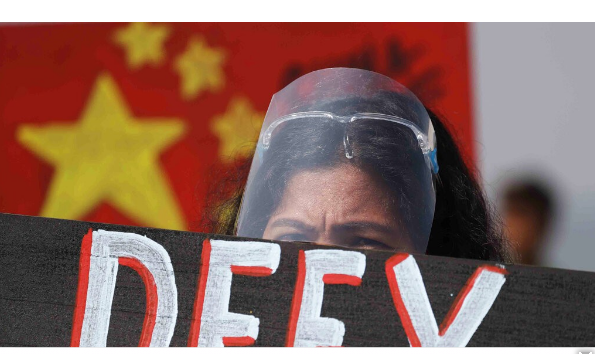 China is trying to expand access to its COVID-19 vaccines to the developing world in order to reframe the pandemic narrative and restore its international image.

However, the strategy has almost failed, as many countries have labeled the Chinese vaccine ineffective. Even in China, these vaccines have failed to generate confidence.

Even China’s all-weather friends Pakistan and Brazil are among the countries that have expressed serious concerns over the efficacy of Chinese jabs. In some other countries, lawmakers have had to assure people that vaccines from China would not be used until they are proved effective and safe.

All these concerns have called into question the reliability of Chinese-manufactured vaccines, and confidence was already shaken due to Beijing's mishandling of the COVID-19 outbreak. The entire world is still suffering even one year after the outbreak, which could have been easily contained at the early stage if China had been transparent and efficient in its governance.

The Butantan Institute in Brazil’s São Paulo has called the CoronaVac vaccine, manufactured by Beijing-based company Sinovac, a “disappointment” since the efficacy rate of the jab could not go over 50.4 percent. Pakistan too has found that the Sinovac vaccine is not useful for people over the age of 60.

Yanzhong Huang, a senior fellow for global health at the Council on Foreign Relations, said: “Those countries that have ordered the Chinese-made vaccines are probably going to question the usefulness of these vaccines.”

Taiwan has cautioned the public against taking any unverified coronavirus vaccine produced by Chinese companies.

Interestingly, there are concerns over the effectiveness and safety of the Sinopharm vaccine within China as well. Human rights activist Guo Li said, “My friend refused [a Chinese vaccine] because of all the issues there have been with vaccine safety, especially affecting children." Employees at PetroChina, an oil and gas company, were given unproven vaccines to use themselves, which caused people to develop suspicions about their safety.

Amid fears that Beijing is trying to make their country a Chinese colony under the China-Pakistan Economic Corridor, many Pakistanis have refused to take these vaccines. Concerned over the inferior quality of Chinese jabs, Farman Ali Shah, a bike rider, from Karachi told Japan Times, “I won’t take it. I don’t trust it.”

Even the governments of Malaysia and the Philippines had to promise their citizens that the Chinese vaccines would not be used until trial results are satisfactory.

China seeks to extend its influence over poor countries — earlier through the Belt and Road Initiative and now using vaccine diplomacy. However, the export of substandard and faulty medical equipment, including PPE kits during lockdowns, has angered people worldwide.

Jorge Guajardo, Mexico’s former ambassador to China, said: "In my experience, every time they’ve engaged in diplomacy, they screw it up — they manage to upset the countries on the receiving end of their aid.”

Chinese vaccines have a history of being defective. In 2018, over 1 million vaccines intended for children were found to be faulty.

This led to huge protests in the country, which are unusual in the surveillance state. The episode invoked the memories of a 2008 scandal in which several infants were killed and over 300,000 sickened due to the addition of industrial chemical melamine to milk powder to boost protein levels.

One protestor said, “Yesterday it was milk powder, today vaccines. What will it be tomorrow?” Demanding answers from Chinese leader Xi Jinping, one netizen wrote, “My home country, how can I trust you? You just let me down again and again."

The past scandals, its own people’s distrust, and now reports of inefficiency have damaged the reputation of Chinese-manufactured vaccines significantly.

Underlining the “non-transparency over scientific data and a troubled history with vaccine delivery,” Joy Zhang, expert on the ethics of emerging science, stated, “A question mark remains over how China can ensure the delivery of reliable vaccines.” Brazil’s President Jair Bolsonaro has also been critical of the Chinese vaccines, saying he would not let the people of Brazil be used as guinea pigs.

The implications of the unreliability of vaccines from China have become evident. The share of pre-order Chinese- manufactured vaccines has gone down significantly in the recent past, and almost all major countries can be seen relying on vaccines made in the US, India, and Europe.

Martin Banks is a British-born journalist with over 16 years' experience covering the E.U. and other international bodies based in Brussels/Belgium for several publications. Prior to that, he worked for a range of leading UK regional newspapers since 1980.